Located undercover inside the Mall of America in Bloomington, Minnesota, Nickelodeon Universe is the first-ever stand-alone theme park dedicated to the kids TV network. Paul Ruben pays a visit.

The fully enclosed seven-acre theme park features 25 rides including five rollercoasters and a log flume. Because it is surrounded on all sides by four stories of stores, Nickelodeon Universe is unable to grow in size, but has developed by changing its selection of rides and attractions. The most radical change in recent years was the arrival of the Nickelodeon brand and integration of characters such as SpongeBob SquarePants and Dora the Explorer.

The park has in fact been part of Mall of America since opening in 1992. Covered by a glass ceiling, it began life as Knott’s Camp Snoopy featuring the Peanuts comic characters, then evolved into simply Camp Snoopy after Cedar Fair’s acquisition of Knott’s Berry Farm in 2005. Cedar Fair departed a year later and the park was re-styled as The Park at MOA. Finally, in March 2008, it was re-themed as Nickelodeon Universe.

“We believe that a branded park is important in this market, where there is so much competition for the entertainment dollar,” explains general manager David Frazier. “The theming is able to enhance the rides and attractions, and the characters are a draw to certain demographics. Peanuts was a wonderful brand with lots of nostalgia, but we were excited about the opportunity to freshen up the park and bring in a new, more youthful brand.”

When searching for a new brand, continues Frazier, “we looked everywhere but kept coming back to Nickelodeon. It’s the number one brand for kids, so in the end it was an easy decision. We work closely with Nickelodeon on all of our marketing. They help by providing images, colour palates and so forth. Ultimately we are responsible for the marketing of Nickelodeon Universe.”

“Our target audience is primarily families,” Frazier continues. “We have smaller rides for the very young visitor such as the Wonder Pets Flyboat and Pineapple Popper, and offer daily meet and greet sessions with Nickelodeon characters. We also have coasters for teens and adults, including SpongeBob SquarePants Rock Bottom Plunge [Gerstlauer EuroFighter] and Avatar Airbender [Intamin Half Pipe]. Therefore we are able to offer something for everyone.”

“We can’t say that we will continue to open new rides every year, only that we have added something each year since we opened Nickelodeon Universe,” says Frazier. “We made a $25 million investment in the park when we changed it over to Nickelodeon Universe. We then added the Ghostly Gangplank in 2009 and will open a new ride in March 2010.”

Opened last August, the Flying Dutchman Ghostly Gangplank is a 56ft-tall ropes and adventure course featuring 38 different sections and over 950ft of walkway, making it the tallest Sky Trail rope course in the world. It is based on the ghost who haunts the seven Bikini Bottom Seas on hit Nickelodeon series SpongeBob SquarePants. Waiting lines sometimes reach one-and-a-half hours.

The new ride Frazier discusses is BrainSurge, the first Unicoaster from Chance Morgan. The 56ft diameter attraction is themed after Nickelodeon’s hit game show of the same name and features a giant glowing brain in the middle. Reminscent of the old Rok ‘n’ Rol by Chance or Allan Herschell Looper, it features an undulating track with eight two-seater looping cars controlled by riders

“When looking for a new ride or attraction,” Frazier says, “we evaluate footprint, size, and the range of appeal. We need to be very selective since we only have seven acres. Our most popular rides are the Log Chute and the Pepsi Orange Streak coaster. We do about one million rides on each of these a year. This is because of the lower height requirement, 47 inches, and their broad age appeal.”

Frazier began working in the industry in 1984 as a ride operator at Valleyfair (a Cedar Fair property) in Shakopee, Minnesota. He started at Camp Snoopy in 1992 as an assistant ride supervisor and worked his way up from there.

“At Nickelodeon Universe we operate differently than most amusement parks,” he clarifies. “In addition to overseeing the day to day running of the amusement park, the operations department, under my direction, oversees the guest service and housekeeping departments throughout the mall as well as the operation of Theatres at Mall of America and Moose Mountain Adventure Golf. This works well because we are able to consolidate staff and have one centralised scheduling office. We have about 400 full-time employees throughout the mall and between 600 to 700 seasonal.”

The indoor park operates every day except Christmas day. High season is during the summer months, spring break, and other school holidays periods. Since it is an un-gated park, it is difficult to know exactly how many people visit throughout the year. However, it is estimated that 40 million people visit the Mall of America every year, and that around a quarter of those come through Nickelodeon Universe at some point during their mall. Over eight million rides were provided in 2009.

“Over the past few years group sales have made up about 7% of our overall business,” Frazier concludes. “We are the largest indoor amusement park in the country and the only all-Nick theme park in the world.” 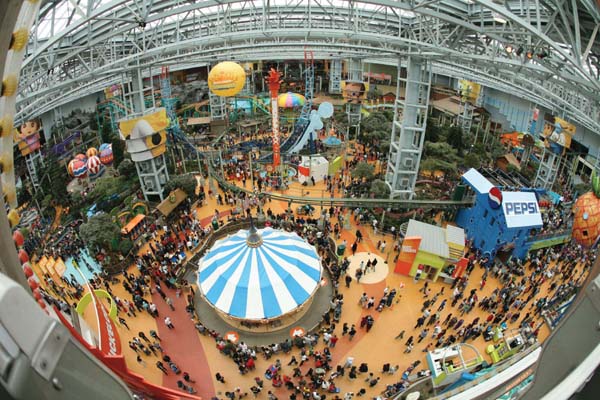 Although there are Nickelodeon “lands” in other parks, in America, Germany and Australia, Nickelodeon is the only park dedicated entirely to the children’s TV network. Accordingly, most of its ride and attractions are inspired by “Nick” characters or licensed properties, and several of them were new when the rethemed park opened in 2008. The full selection is included below.

Back of the Barnyard Hayride (Zamperla Dragon Coaster)

Also featured at Nickelodeon Universe are the Butterfly Bay Aviary, midway games and an arcade. 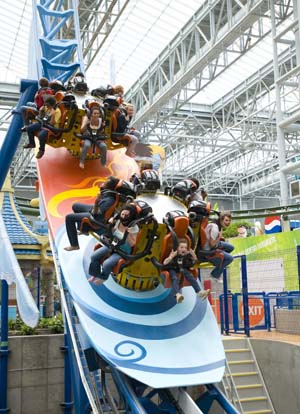