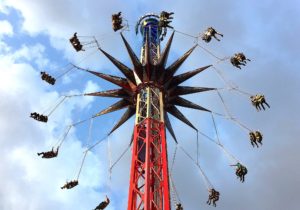 Darien Lake, a Six Flags Theme Park in Darien Center, New York, will debut the tallest attraction in the entire state, the all-new Six Flags SkyScreamer, for the 2019 season. This 242 foot (74 m) tall swing ride by Funtime will reign as the region’s new, iconic symbol, beckoning guests from near and far. The park will also be rebranded Six Flags Darien Lake when it opens next spring.

“We are thrilled to introduce the kind of innovative, world-class attraction that Six Flags is known for,” said Darien Lake Park President Chris Thorpe. “This high-flying tower ride will offer guests a chance to soar through the clouds with majestic views of the park and surrounding countryside far below. Six Flags SkyScreamer is an exciting, new addition befitting the name Six Flags Darien Lake.”

Once the 32 thrill-seekers board the ride, it quickly rises, taking guests 24 stories into the air while spinning round and round at speeds of up to 35 mph (56 kph). By night, Six Flags SkyScreamer’s bold, synchronized light package will light up the skies.