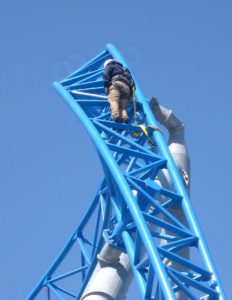 Crews at Playland’s Castaway Cove, Ocean City, New Jersey, are completing the replacement of all 1,200 feet (366 m) of track on the Gale Force roller coaster. Supplied by S&S – Sansei Technologies, the LSM Triple Launch Coaster opened in 2017. The ingenious design of the three launches (one forward, one backward, and a final forward launch at 64 mph (103 kph) was expected to provide an exciting ride experience on a coaster that has a very small footprint. S&S had packed the ride design with an unbelievable number of elements, including a 125-foot (38 m) crest, the pure rush of a 100° down drop at a pulse-racing 59 mph (95 kph), a 180° twisting climb, an off-camber dive drop, a corked roll, a top hat twist, and a raven dive. But it was bumpy to ride. The supports had been built by a Chinese supplier and the track came from, a European subcontractor. They didn’t line up perfectly, and the track was not smooth. Safety was never an issue.

Now the support’s contact points have been surveyed using lazers and new track fabricated by S&S’s primary subcontractor based in Utah to match the support point locations perfectly. S&S is absorbing the cost of the track replacement. Will the new track smooth out the ride? The answer is expected in mid-May when the first train makes its initial run.

Coventry set to get a £38.7m water and leisure complex neighbour