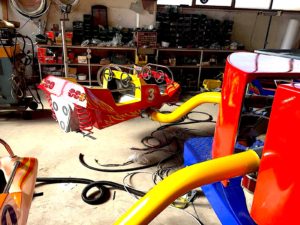 Quassy Amusement & Waterpark, Middlebury, Connecticut, will install a new Bouncing Buggies ride from Zamperla this year. The new ride is shown in production at the Zamperla manufacturing facility in Italy. The Quassy family attraction, from Zamperla’s popular Jump Around line, will mark 16 consecutive years of improvements at the family-owned property. The new ride will be delivered in March and placed in the heart of the lakeside park in time for Quassy’s 111th season opening on April 27.