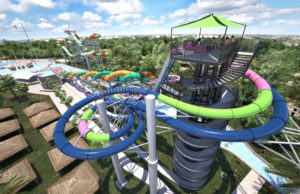 Schlitterbahn Galveston Island, Galveston, Texas, has added a new multi-million dollar set of slides that are more than the first of its kind – they are out of this world. Infinity Racers is a pair of space-themed, racing head-first mat slides. At eight stories (75 feet or 23 m) tall and as long as two space stations (696 feet or 212 m), Infinity Racers delivers a fun, only one in the world, water slide experience. Both of the racing slides are nearly fully (85%) enclosed the entire time (except for the loading and splash zones) with multi-colored fiberglass that creates unique lighting effects inside each slide.

Schlitterbahn chose to add a space theme to the slides in honour of the men and women of NASA and the Johnson Space Center, who have inspired the world to reach for the stars. Given the park’s proximity to the space centre, it’s also a salute to the entire region.

Engineers took full advantage of the existing tall tower to maximize slide time for guests. Riders slide head-first on mats, racing along enclosed twists and turns over the park’s river system and cabana village until they slide down to the splash zone at the base eight stories below.

Infinity Racers is the perfect addition to Schlitterbahn Galveston Island, which is known for its many high thrill slides. In fact, Infinity Racers joins Massiv and the park’s Torrent Indoor River (the longest in the state) as another record-breaking water ride.