The all new Luna Park opened its gates at this famed destination in Brooklyn on May 29, with thousands of local residents and tourists alike lining up to be among the first to attend. The park was designed and developed in just 100 days by Central Amusement International (CAI), which was designated earlier this year by the New York City Economic Development Corporation to operate the facility for a 10-year period.

“The fun is back in Coney Island,” says CAI president Valerio Ferrari. “We’ve got rides that will flip you, spin you, splash you and thrill you. Luna Park is going to give families from all over the world the kind of incredible experience that can only come from Coney Island.”

In fact, several similar attractions already appear at Minitalia Leolandia near Milan, where until recently Zamperla had a similar involvement, and CAI already operates another amusement venue in New York, Victorian Gardens at Central Park. But the Luna Park project is more high profile than either of these thanks to Coney Island’s status.

Named after one of the seaside resort’s original amusement parks, which operated from 1903 to 1948, the new Luna Park pays tribute to “the birthplace of the amusement industry,” while keeping alive its tradition of innovation. The park features a façade modelled after that of its namesake, a spinning coaster called The Tickler is a modern take on an original Luna Park ride of the same name, while the Coney Tower drop tower is a tribute to the original Parachute Tower, which stands idle outside the park. Signage and theming throughout the park, including the iconic Luna Park crescent moons and the Steeplechase Park “funny face,” also recall imagery from Coney Island’s past.

The new park has sustained large crowds even after the buzz of opening day, and has also stimulated business for Coney Island’s existing amusement operators.

Among Luna Park’s 19 new custom-built rides are a number of Zamperla originals, and the park is expected to serve as a showplace for buyers of the manufacturer’s rides in North America. One such attraction is Air Race, making its world debut at Coney Island. Simulating the experience of a fighter pilot, Air Race flips riders upside down as their planes spin around a central axis with up to 4Gs of force.

“Luna Park features a mix of world class rides that offer something for everyone,” believes Fernando Velásquez, the park’s general manager. “We selected the rides in a way that would maximise the park’s available space, while providing an assortment of classic and cutting edge rides. Following this season and each season moving forward, we will evaluate the success of our current attractions and determine what new rides to bring to Luna Park.”

CAI has hired over 200 staff to run the park. Before taking his assignment at Luna Park, Velásquez was general manager of the Minitalia Leolandia and before that managed Victorian Garden in New York City.

“Coney Island is the birthplace of the amusement industry,” he highlights, “and many popular attractions first appeared in its world-famous parks. Zamperla intends to continue that spirit of innovation by introducing new, never-before-seen rides at Luna Park each year, beginning with Air Race.”

Velásquez lists the Tickler coaster, the Air Race, Electro Spin and the Brooklyn Flyer vertical swing as the park’s four most popular attractions. As well as the rides, there are also five food stands located throughout the park, a restaurant and games by Bob’s Space Racers.

The park’s pricing structure includes Luna Cards, which work like debit cards and can be purchased and refilled at stations throughout the park. Credits cost $1 each, and rides are between three and five credits each. As an alternative, visitors can purchase four-hour unlimited ride wristbands for $26/30 (weekdays/weekends) or six-hour wristbands for $30/34.

Race to the Finish

CAI built the 3.2-acre (12,800 square-metre) Luna Park in just over three months, working alongside 10 engineering firms and designers from the United States and Italy. The total cost exceeded $15 million (€11.5m), with the City of New York investing more than $6.5 million.

“Central Amusement International was selected to develop and operate the park by the City of New York in February 2010,” notes Velásquez. “While developing an amusement park typically occurs over a much wider time frame, it was important to the economic vitality of Coney Island that the park be complete in time for the summer season.”

Luna Park forms part of the New York City’s Coney Island Revitalization Plan, which will preserve and grow the historic amusement area. The plan will create a vibrant mixed-use neighbourhood with new retail options and nearly 5,000 units of housing. As part of the plan, The City is investing a total of more than $150 million toward Phase I infrastructure improvements in Coney Island, including upgrading the underground infrastructure and rebuilding large sections of the boardwalk.

By summer 2011, Luna Park will open Scream Zone, a $12 million expansion sure to please adrenaline junkies with four additional thrill rides, including the debut of two new rollercoasters. CAI will also take over some of the concession stands on the Coney Island boardwalk.

Luna Park was the name of a Coney Island amusement park that operated from 1903 to 1944. Working closely with the City of New York, it took Zamperla, its US subsidiary (Zamperla Inc) and Central Amusement International (CAI) less than 100 days to build the new Luna Park. Valerio Ferrari (pictured), preisdent of Zamperla Inc, looks back on that hectic period

I would have preferred more time to build Luna Park, but 100 days is a nice amount of time. A year would have been even nicer. We did what we had to do in about 90 days and were ready on opening day.

Zamperla is a manufacturer, so we can build rides in that period of time. Some of our rides were being built before we were awarded the 10-year lease and would have been sold to others if necessary. We were able to build the necessary kiddie rides in the three months after we won the lease. All the attractions we had planned to introduce we were able to accomplish within that three-month period.

We know rides well, but work on the infrastructure was a challenge. I put together a team of experts to accomplish this within a tight deadline. We had to co-ordinate the activities of 10 engineering firms who designed the electrical infrastructure, plus the sanitary, water and storm plans. Then we had to install 19 new attractions, design and build five food outlets and a restaurant.

The work of graphic studios and our ad agency in both Italy and the USA had to be co-ordinated, and during this period we had to hire 211 people to operate the park. It was a very good team effort.

During this three-month period we had 300 people working on the park. We had to complete 20 Department of Building applications. We had more than 200 inspections. We received 43 overseas containers, and had to unload 1,800 trucks. We laid more than 50,000 feet of wires inside 50,000 feet of conduits. About 3,000 cubic yards of dirt was moved. There were some long hours spent on the site.

However, I was never worried that the park would not be ready on time. Maybe it seemed an impossible task to others, but never to me. I never had a doubt that we would be ready. Now that we are open I am very happy with the results, especially considering the time frame we had and that we had to do this in an environment like New York City. Yes, I am very happy. 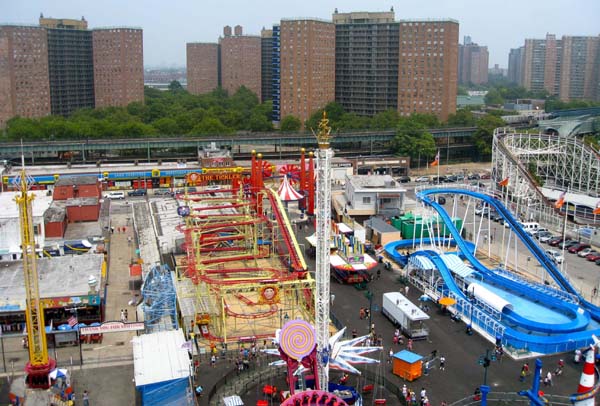 We have built and opened a world-class amusement park that begins the next chapter in Coney Island’s remarkable history. We look forward to welcoming back the countless people throughout the world who have visited Coney Island in the past, and to creating incredible new memories for the millions we will welcome for the first time in the coming years.

The new Luna Park at Coney Island features a package of nearly 20 rides from Zamperla, proving what a varied range of attractions the Italian manufacturer now produces. The full list is as follows (park name followed by Zamperla catalogue name): 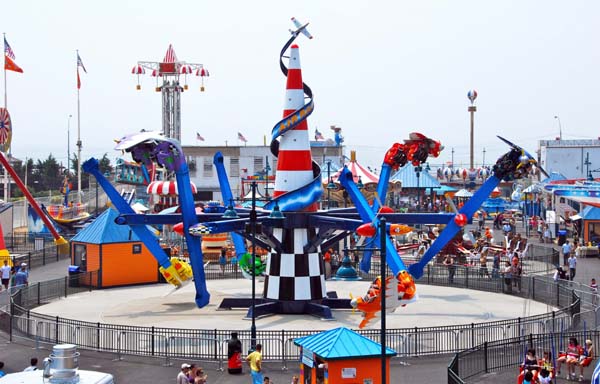