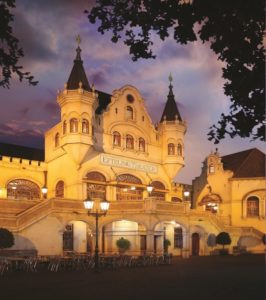 In September 2018, Efteling – the fairytale theme park in the south of Holland – will launch a new show called CARO directed by famous Dutch actor and director Stanley Burleson. Created for an international audience, CARO will be the first production of its kind to feature at Efteling’s magnificent on-site theatre.

The visually-led production – launched as part of Efteling’s strategy to further internationalise the park and boost the number of overseas visitors – will feature very little language making it suitable for all international visitors. Guests from all nationalities will be able to recognise and relate to the show’s themes, which will explore everyday life.

Stanley Burleson who is known for his work on the Dutch version of the musical of the Three Musketeers, comments: “Efteling is famous for offering guests wonderful family theatre productions and I am delighted to have been chosen to direct the new CARO show. I fully endorse the park’s decision to produce this unprecedented Efteling show. I look forward to sharing my acting and directing experience with the wonderful world of Efteling and to start working on CARO”.