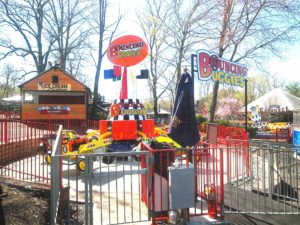 The new Bouncing Buggies family ride by Zamperla was ready to roar whens Quassy Amusement Park, Middlebury, Connecticut, opened for its 111th season at the end of April. Bouncing Buggies is located in the heart of the lakefront property. Each of the six vehicles seats up to four children or one adult and two children. As the ride spins into action, it combines Zamperla’s patent-pending interactive bouncing motion. In 2017 Quassy acquired a new Zamperla Samba Balloon ride the park calls Up, Up & Away, and in 2012 the property added the supplier’s Tea Cups, titled Crazy Cups by the park. Both are popular family attractions.

“It has a unique and lively action like nothing we’ve offered before,” Quassy President Eric Anderson noted. “The dune buggy themed vehicles will accommodate both youngsters and adults, making it an ideal fit for our demographic.”

In addition, Quassy has refurbished its Ice Cream Parlor and added light emitting diode (LED) lighting to some more existing rides within the park. Last season the Yo-Yo Super Swing ride and Tilt-A-Whirl were enhanced by the new energy-saving light packages.

“We’re always looking at ways to make the guest experience more enjoyable at the park,” Anderson added. “Thanks to the continued support of our valued guests, we have been able to make vast improvements to both the land rides area as well as Splash Away Bay waterpark.”