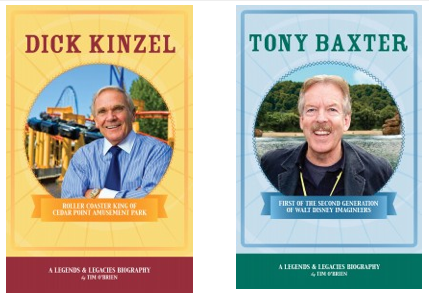 When writing biographies on industry heavyweights such as Dick Kinzel and Tony Baxter, some authors might be tempted to weigh in with a massive tome of several hundred pages, but Tim O’Brien knows better.

The veteran amusement industry journalist been around long enough to know tastes have changed and so the first two titles in his new Legends & Legacies series are informative yet bite-sized books perfectly suited to the internet generation.

“More than a memoir, each volume is a creative and management self-help book filled with valuable insights and lessons in creative leadership from the greatest builders and dreamers of all time,” adds O’Brien.

The 100-page Tony Baxter – First of the Second Generation of Walt Disney Imagineers profiles the man credited for creating such Disney attraction icons as Star Tours, Big Thunder Mountain Railroad, Splash Mountain and Indiana Jones Adventure. His only encounter with Walt Disney was when he started out at Disneyland as a Main Street ice cream seller, but he worked with and learned from many of the great first generation Disney Imagineers, including notably his mentor Claude Coats.

An invitation to “come on down here” for a closer look during the construction of Pirates of the Caribbean ignited a spark in the
young Tony and for the 47 years that followed, his flame burned brightly within Walt Disney Imagineering, until his retirement just a few years ago. Although, as is revealed candidly in the book, Tony would clearly like to have remained part of the team a little longer, he has been a prolific speaker and fan favourite on Disney matters ever since, and boasts the ultimate accolade any employee of the theme park pioneer can achieve: a window on Disneyland’s Main Street USA.

In Dick Kinzel – Roller Coaster King of Cedar Point Amusement Park, O’Brien highlights over 122 pages how coasters took Kinzel to the top of the Cedar Fair chain but how a $1.24 billion acquisition of Paramount Parks ultimately lead to his direst years.

During his 39-year career (25 as president and CEO of Cedar Fair) he oversaw the introduction of the world’s first 200, 300 and 400-feet (61/91/122m) tall rollercoasters. He brought big, edgy and expensive constructions to Cedar Point knowing that the bigger the thrill, the bigger the crowds. His story is one of tenacity, conservatism and risk taking. It’s one of big business and of making fun.

Both the Kinzel and Baxter book are available for under $20 each via casaflamingo.com and Amazon. British readers can also pick them up from amazon.co.uk, where they are printed locally, and so benefit from reduced postage costs. New Legends & Legacies biographies are planned from Tim O’Brien as time and subjects allow, but if you grab these first two volumes now, we guarantee you’ll have breezed through them well in time for the next thrilling installment.