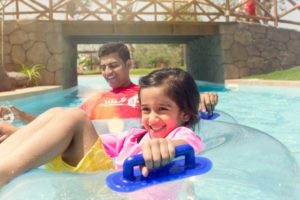 The second phase of developments at Shurooq’s Al Montazah Amusement and Water Park is underway, and details on a number of new amusements and attractions have been revealed at a press conference – held at 1971 Design Space, The Flag Island.

Pearl Kingdom, the water parks’ new attraction, will feature theming inspired by Princess Pearls, a mythical character who built a kingdom with her knowledge of the sea-stones. Khalid Ebrahim Al Qaseer, manager of Al Montazah, commented that the water park will contain 35 attractions, a wave pool with a capacity of 200, a slide tower, and areas and activities for little ones.

In addition to these new amenities, Shurooq announced that the capacity of the park has been increased to accommodate 7,000 guests.

“We will reopen Al Montazah in a brand-new attire featuring attractions that will take visitor experiences to a whole new level,” said COO of Shurooq. “We have worked in a committed manner to bring new entertaining features to the water and theme parks since we opened the facility in 2014, and will continue to offer services that confirm to highest standards of quality.”

The project is estimated to cost over AED100m, with the park opening imminently.