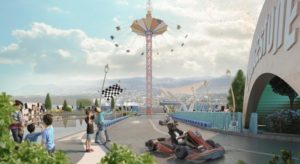 Grupo Diniz, operator of the Recórcholis family entertainment centres, will invest 550 million pesos in the development of the new park, which will be located in the Parque Las Antenas shopping centre in east Mexico City.

Named Kataplum, the amusement park will have an area of more than 27,000 square metres with an estimated influx of 1.2 million annual visitors. Construction will take place on the top floor of the mall, which will be reinforced to support mechanical games and attractions including a roller coaster.

The amusement park brand Kataplum is expected to represent up to 50 percent of the total revenues for Grupo Diniz, which also operates the chain of Recórcholis family entertainment centres. According to Group executive president Antonio Quevedo, growth will be driven in the future by the possibility of at least one further amusement park opening. “We see in this model an important model to grow and we hope that by 2021, the amusement park model represents 50 percent of the company’s total revenues,” said Quevedo.