How many times have you stood at the airport waiting for you bag on the luggage carousel and thought what a great ride system it would make? The German company One World Studio has gone one step further and developed the patent-pending Rolox kiddie conveyor.

Designed primarily for indoor parks and family entertainment centres, but also suitable for outdoor use, it offers a flexible roller system along which cars slide at up to 10 metres per second.

Any ride path is possible, either with or without a slope. Optional hydraulic lifts, turntables and see-saws allow for changes in height and direction. The system is also suited to dark rides and the cars can be equipped with shooters to make them interactive.

Ride vehicles can be supplied either as a fixed two-seater “box” (designed to mimic a parcel), atwo or four-seater spinning saucer, or a custom design on request. Capacity varies widely according to the path built and mix of adults and children riding, but a typical hourly limit could be between 480 and 600 passengers per hour.

The ride will be built under licence by the Austrian ski and leisure transportation specialist Sunkid. Using modular roller sections, a path can be put together “like using Lego blocks,” according to One World managing director Olaf Mordelt.

Originally developed as a proposal for a well-known chain of indoor attractions, it is hoped the first system will be up and running within six to eight months. 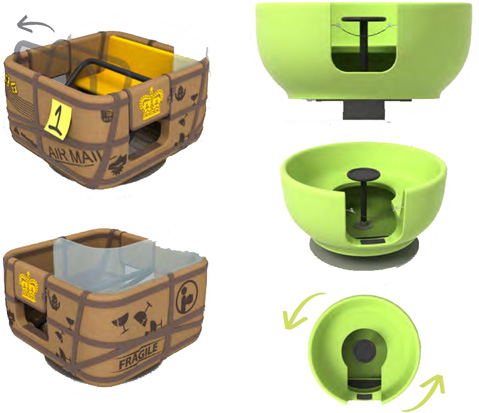