At a cost of $400m, Australian Legend World has been listed as one of 40 major projects by the Chinese Ministry of Culture. The announcement is part of the country’s Belt and Road initiative, which was implemented in 2013 by the Chinese Government to build infrastructure to and from Asia, Europe, and Africa. 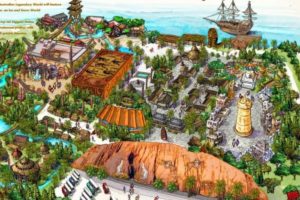 Australia is not part of the initiative, but individual investment projects in Australia still have free reign to sign up themselves.

Songcheng Performing Arts Development Company are planning to develop Australian Legend World at Nerang. It will be their first park abroad, though the company operate six parks in China.

Australian Legend World will feature historical and educational performances created by both Chinese and Australian consultants, but managing director of the Canford Property Group and Songcheng’s spokesman in Australia, Roland Evans, said that the listing does not mean the Chinese Ministry of Culture will be able to influence the operation of the project.

“[The ministry] will keep obviously a close eye that it mirrors what the constraints of the One Road One Belt system is.” said Evans.

Australian Legend World, described as a “key cultural trade and investment project” by the Chinese Ministry of Culture, will house an indoor ski field and housing for up to 2,000 residents.