MX4D expanding on five continents in 2019 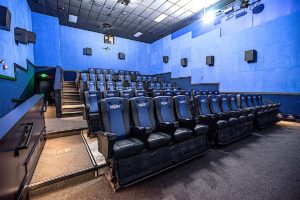 Torrance, California based MediaMation Inc., makers of the immersive motion EFX experience MX4D, will be expanding its presence with over 50 new global installations in Asia, Europe, North America, South America and Africa beginning in mid-2019. The announcement was made recently by CEO Howard Kiedaisch. The new installations jump from 346 facilities to over 400, a 15% increase of facility locations, pending to date.

MX4D programs blockbuster hits such as Warner Brother’s Aquaman as well as Disney-Marvel’s current feature Captain Marvel; these event films do well because of their intimate in-theater and communal experience. “These films tend to sell out on weekends and enjoy extremely high occupancy rates during the week,” stated Kiedaisch. “Our theatres are created to serve movie lovers and thrill seekers who want a full and impactful movie going experience with audience participation. We have been thoughtful in our growth and the new ventures globally and domestically are part of a greater vision that includes MX4D technologies as well as opportunities for immersive esports team gaming events and more.”

The exhibitor up-charge averages about $8 per ticket. Independent surveys conducted by Survey Me this year on behalf of MediaMation, indicate a ready acceptance of this surcharge for this immersive fun experience that #YouCantGetThisAtHome

Expansion of MX4D theaters includes systems that are set to open in Q2 at Filmhouse Cinema’s Victoria Island Theatre in Lagos, Nigeria. Shortly after that Filmhouse’s Landmark Village in Lagos will open. These new installations in Africa join MX4D’s current presence in Egypt with MISR International’s Point 90 and Plaza Theatres in Cairo. In addition, MX4D Motion EFX Auditoriums are now under construction with Muvix Cinemas of Chile. The imminent first opening will be at La Fabrica. These MX4D branded auditoriums in South America join an already large motion EFX footprint in Colombia through an ongoing relationship with Cine Colombia. Other international installations set for this year include Inox Theatres’ first location at the Inorbit Mall, Malad West, Mumbai. This initial foray into India, joins a huge Asia presence for MX4D, with nearly 250 installs in greater China, a large EFX theater footprint in Japan, and many great grossing locations across the Middle East. Additional existing locations on the world’s largest continent include Thailand, the Philippines and Malaysia. New installs will be announced shortly in Europe, joining new facilities with Cineplexx in Austria, Serbia, and Croatia. Additional continental state-of-the-art MX4D theatres currently operate in France.

State-side, MX4D will be expanding in North America. Set to open in early April is B&B’s sixth U.S. location in Overland Park, Kansas. Also, currently under construction is the historic TCL Chinese Theatre’s first foray out of Hollywood to the similarly themed Theatre Box in San Diego’s Gaslamp District with an MX4D auditorium, convertible to an esports arena; much like the original location in Hollywood. Other existing EFX theater locations are spread across the United States, Mexico and soon to be in Canada.

In addition, and as exhibitors diversify their theater content, MX4D also offers a proprietary esports arena conversion system. It enables their auditoriums to go from 4D film presentations to interactive gaming centers, with sponsorship zones, live transmission of contests, pop up gaming consoles and an effects jockey station. Just as important, through a joint partnership with Hollywood Esports, MX4D has developed the ability to attract top gamers, tournaments, leagues and gaming audiences to the theater environment.

Adding to its multi-national, cross continent identity, MediaMation’s MX4D is now co-owned and part of the Luxin Rio Group of China, along with London based Arts Alliance Media, makers of cinema/server/software solutions and French based Volfoni, a leader in 3D technology.