The Ghost Ship has arrived at Morey’s Piers, Wildwood, New Jersey. This immersive, half-hour-long experience features multiple costumed actors and animatronics spread across a labyrinth of interconnecting decks and walkways.

The action takes place inside a 150-foot-long (45-metre) cargo ship named Ignis Fatuus, which has apparently crash-landed into Morey’s Mariner’s Landing Pier. Spread across 14,000 square feet, the walk-through covers two levels, the upper deck open to the sky. The experience lasts nearly 30 minutes, or about 10 times the average length of a typical walk-through attraction.

We built the Ghost Ship where the original Seaport miniature golf course had been located. Our father, Will Morey Snr, and architect Fred Langford, dreamed that up in the early ’80s,” notes Morey’s Piers president Will Morey. “We decided to get back into the custom-built, classic boardwalk attractions business.”

“Our guests have been telling us they want two things more than anything else …rollercoasters and dark rides,” adds executive vice-president Jack Morey. “We have a great attraction here. We hope it will have a positive impact on both guest satisfaction and attendances.”

The Ghost Ship took two years to design and six months to build, at a cost of approximately $3 million. More than 100 workers were involved in its construction. Spread across 14,000 square feet, there are 15 “scare boxes” and numerous props. At any one time there are between eight and 10 actors roaming the ship to startle guests.

Together with Jack Morey, lead project designer Russell Betheau and local author Terry O’Brien explored several themes including aliens, crab people, cyborgs and meteors before settling on the Philadelphia Experiment. The Ghost Ship and its back-story are based on a bit of Latin wordplay and the famous conspiracy theory about an experiment that supposedly made a US naval ship invisible in 1943.

The Ghost Ship’s name, Ignis Fatuus, has two meanings. It is either a flitting phosphorescent light believed to be due to the spontaneous combustion of gas from decaying organic matter, or something misleading.

“A good haunt or scare will always be popular, but when you add live actors the attraction, well …it just sort of comes alive,” says Jack. “The experience is always different. So far our guests seem to be in awe over the sheer size of the attraction and find the actors to be both hilarious and sinister. A perfect combination if you ask me!”

Jack couldn’t resist joining the cast, however briefly. “Going through at night is definitely scarier than the day and is my favourite time to try my own hand at acting. There are several outstanding parts of the attraction, but I would have to say my favourite is one that was not even planned. It is in the wheelhouse section, but I do not want to give it away so you will have to see it for yourself. Another favourite might be the gallery or the exploding toilet scene …it’s really gross, but funny.” 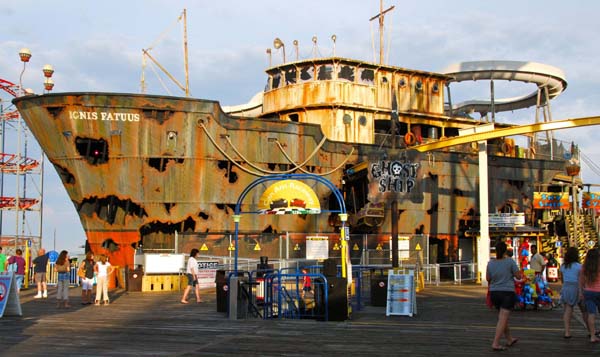 Make no mistake; Ghost Ship is a unique attraction, the kind that has been missing from New Jersey’s parks for years. It recalls the macabre pirate ship Skua that once challenged visitors to Hunts Pier. The Jersey Shore has a rich history of elaborate dark walk-throughs. At one time there were three large haunted walk-throughs. These included the Haunted Mansion in Long Branch, which burned down in 1987, the Brigantine Castle in Brigantine that closed in 1984 and Wildwood’s Castle Dracula that burned down in 2002. Because of this history of blazes in such attractions, Ghost Ship has a state-of-the-art fire system including sprinklers throughout. Morey’s Piers also currently operates several smaller dark attractions (see panel). Beach goers obviously love dark rides.

“One of the reason park guests want dark walk-throughs is that there are just so few of them now,” notes Jack Morey. “What started as a classic seaside attraction has evolved to overly mechanised and somewhat predictable attractions. Part of what makes Morey’s Piers special is the fact that much of the environment feels like a big street theatre. By building a walk-through with live actors, we add to the uniqueness of the street theatre.”

Throughout the construction process, Morey was secretive about what the attractions would be. It was a stroke of genius as the intrigue raised the curiosity level of prospective visitors. “This was one of the most challenging attractions we have ever built,” Jack acknowledges. “Perhaps the hardest part was attempting to continually shroud the facade as it started to grow beyond what was reasonably shroud-able. In the end we simply abandoned the big red shrouds as it was interfering with completing the attraction on time.”

Considering adding a similar attraction at your park? “This venture is not for the faint of heart,” warns Jack Morey. “Had we not had an existing piece of infrastructure to start with I do not think it would have been possible.”

Morey’s Piers have never remained open as late as Halloween, but with the Ghost Ship, will they reconsider? “At this point,” admits Jack Morey, “we are in the thinking stage regarding a possible Halloween event.”

Located on the boardwalk in the Wildwoods, New Jersey, the Morey’s three amusement piers have been family owned and operated since 1969. Together Mariner’s Landing, Surfside Pier and Adventure Pier feature over 100 rides and attractions. The operation also includes two beachfront waterparks, Ocean Oasis at Surfside Pier and Raging Waters at Schellenger Avenue, and several lodging and dining opportunities.

Convenient to the major population centres of the North Eastern United States, including New York City, Philadelphia and Baltimore, Morey’s Piers combines the joy of an amusement park, the sights and sounds of a classic boardwalk, and fine accommodations with the rhythm of beach life. 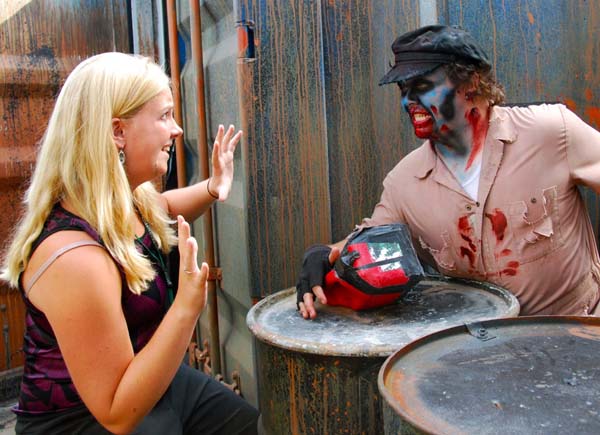