Two more Cedar Fair operated parks in North America are to add a WindSeeker by Mondial.

Carowinds in North Carolina and Kings Dominion in Virginia have been chosen for such an attraction following the installation this season of rides at Knott’s Berry Farm, Cedar Point and Canada’s Wonderland.

Like the other three, these latest versions, which will open in 2012, will stand 301ft (91.7m) tall. Each $6.5 million attraction will feature 32 two-passenger swings, providing capacity for 64 passengers per ride, or 960 an hour. Riders will experience a sense of weightlessness as the swings reach speeds of up to 30 miles per hour and the arms extend outward at a 45-degree angle. As well as LED lighting, each machine will also be equipped with speakers on the main ride carriage, providing a musical soundtrack high up in the sky.

At Carowinds, WindSeeker will be located in the Carolina RFD section of the park, near to Snoopy’s Starlight Spectacular. The ride will climb 69ft (21m) taller than Intimidator, the massive B&M coaster introduced at Carowinds in 2010. A portion of the lake near the Nighthawk rollercoaster will be filled in to accommodate this massive tower ride, construction on which will begin this autumn.

Over at Kings Dominion, WindSeeker will be located near the current site of the Extreme Skyflyer attraction and the Juke Box Diner. The new ride will climb just above riders on the popular Drop Tower, whilst dwarfing Wave Swinger, the park’s original swing ride that opened in 1975, standing a relatively short 31ft (9.5m) tall,

The sense of soaring 30 stories in the air will be both exhilarating and breathtaking at the same time,” believes Carowinds’ vice-president and general manager Bart Kinzel. “This new addition will give guests an unparalleled view, making it a must-ride attraction for both families and thrill-seekers alike. The immense scale of this ride alone will be truly stunning.” 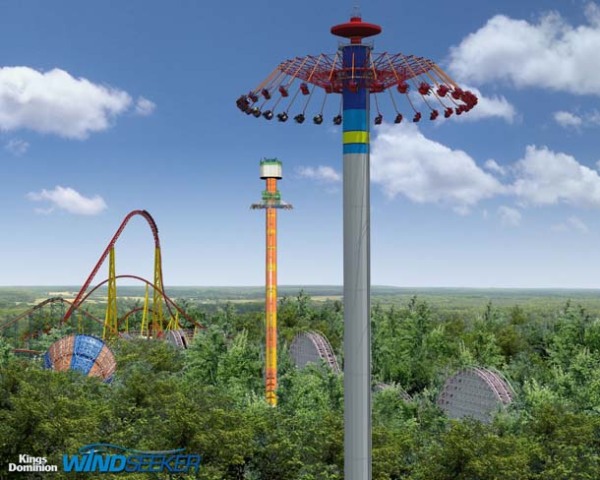