Located on Chautauqua Lake about 70 miles southwest of Buffalo, New York, Midway Park was became one of the over 1,000 “trolley parks” that dotted the US during the 1920s. Today, only 12 such parks remain. Gary Kyriazi discovers how smallest, least known and least attended has survived.

Opened in 1898, people crowded trolley cars headed for Midway Park to enjoy lake bathing, roller skating and rides such as the John Miller-designed Jack Rabbit rollercoaster, while dancing to the Glenn Miller Orchestra. Moreover, Midway Park survived when its closest trolley park competitor, Celoron Park a mere 16 miles away, shut down in 1962. How was all that possible?

“There are two reasons,” General Manager Andy Hillman, 36, explains. “First, it was the commitment from the previous owners of over 50 years, Martin ‘Red’ Walsh and his family, to keep the Midway Trolley Park nostalgia alive. Secondly, it was the purchase of the park by State of New York in October 2006, that prevented it from closing. We’re one of only two government-owned amusement parks, the other being Playland in Rye, New York, which has been owned by Westchester County since it opened in 1929.”

And why was New York interested in purchasing Midway Park? “The Walsh family was receiving very attractive offers from condominium builders to raze the park. But Chautauqua Lake has very limited access to the public, as most of the lakefront is privately owned. We wanted to maintain that public access, and also we felt a commitment to the history of Midway Park and its influence on the local community. The park is now listed as a State and National Historic Site.”

“Now,” Hillman adds, “we’ve got our work cut out for us. There’s a lot of infrastructure that needs work, particularly our Hippodrome building. Also, we’ve had to remove our 1946 Allan Herschell carousel out of its roundhouse building, as the roof on that building needs refurbishing.”

The cost of those two projects alone? Half-a-million dollars. Can the state afford that? Are there more pressing issues than the preservation of a trolley park?

“Absolutely. We’re realistic about the priority level of Midway Park, so we’re trying to gather money from other sources. To do so we formed a Friends of Midway Park Group. They’re a non-profit organisation, and as such they can apply for grant money that we as a state agency would otherwise not have access to. The Allan Herschell Museum in North Tonawanda, New York (the legendary amusement ride manufacturer) received such a grant for historic preservation. We’re hopeful Midway Park can be helped in the same way. The Friends Group would also function as advocates and ambassadors, organising volunteers. Our carousel needs renovation, and we’re looking at getting donations from businesses and private individuals, for the stripping and repainting of one horse at a time.”

The challenge is certainly a tough one for Midway Park, surrounded as it is by such larger, more developed, and magnetic parks as Kennywood, Darien Lake, Fantasy Island, and the closest, Waldameer Park. Plus, Midway Park is far off the beaten path from any metropolitan area. Still, there is a considerable market.

“Our season pass holders are local people. A lot of people from out-of-state come to their summer homes around the lake, and they bring their children and grandchildren. We get Jamestown from the south, Fredonia and Dunkirk from the north. Of course, we’re near Erie, Pennsylvania and Buffalo, and while we don’t pull heavily from there, a lot of people have fond memories of Midway so they opt to travel a little longer distance to enjoy the nostalgia of riding the same rides they rode when they were children.” 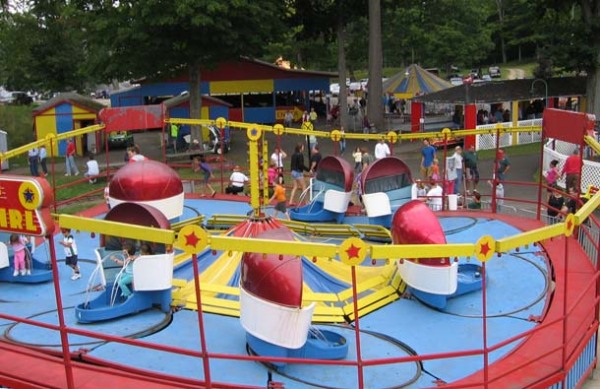 There are two main levels to Midway Park: the lower, historical section of the park including the Hippodrome, carousel roundhouse and the original arcade building, and a higher level near the park’s entrance.

“We put the rides on the top level because the skating rink was still heavily used at the time, and it was busy there,” explains Hillman. “ But also, there’s more flat space on the upper level.”

Interestingly, John Miller used the two levels of the park for the design of Midway’s 1925 Jack Rabbit coaster, working with the levels as he did for his 1920 Jack Rabbit at nearby Seabreeze in Rochester, and his 1921 Jack Rabbit at Kennywood in Pittsburgh. Midway’s Jack Rabbit loaded at the lower lake level, its lift followed the natural rise up to the top level, where it performed some dips before diving back down to the lower level for the finale. Sadly and typically of classic wood coasters, Midway’s Jack Rabbit was removed around 1939.

Beyond the significant task of renovation and restoration, what hopes does Hillman have for future expansion? “Oh, it would be great to have, say, a rebirth of the Jack Rabbit coaster, but we have to be realistic. At this point, due to the current fiscal condition of New York State, we’re not doing any large ride purchases. If we did make a ride purchase it would be to replace our Eli Bridge Ferris Wheel, which just wore out and had to be removed around 1979. So we’re mainly working on the infrastructure, with the emphasis on the historical theme.While digging out an area for a volleyball court, we uncovered some of the original trolley tracks and ties, so we’re thinking about excavating the whole thing and obtaining or replicating a trolley car. At the lakeside, in keeping with the historic look, we’re looking at candy-cane lighting.”

And how has the State of New York taken to running an amusement park?

“Well,” Hillman smiles, “for me, the amusement industry has been a real learning curve. I’ve been involved with state parks but never amusement parks. I can certainly see how people become hooked in this industry. But as far as the state is concerned, to be honest, it’s difficult to make an amusement park profitable within any government agency, so New York is putting out requests for management proposals. The only concession we have at this time is the vending, so we’re now looking for a management company.”

Any takers out there? It could be the chance of a life time: bringing Midway Park back to its grand old self.

Gary Kyriazi is the author of The Great American Amusement Parks, A Pictorial History, and has been a writer and researcher for the amusement industry for 38 years. 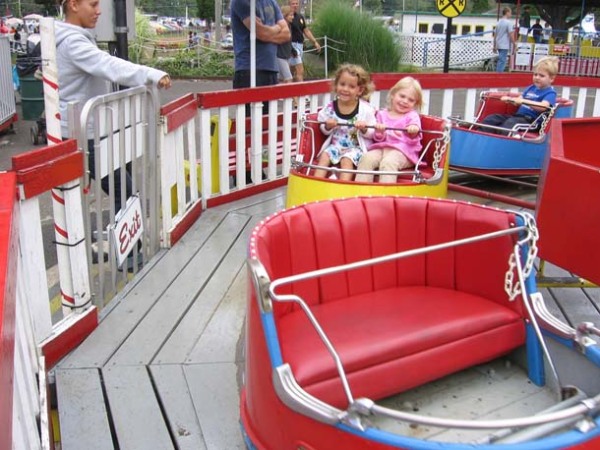