An 18-year veteran of Merlin Entertainments, Scotsman Iain Hawkins is the head of the Blackpool “cluster” for Europe’s largest attractions operator. Here he discusses the groups plans for this famous British resort.

After running a Sea Life centre in the British resort for the last two decades, Merlin is stepping up its operations with the takeover and opening of seven new attractions, including the UK’s first Madame Tussauds and “Eye” branded experiences outside London. Many of these activities are centred around the town’s landmark tower building. The 518ft (158m) structure will be relaunched this September following a multi-million pound investment by Blackpool Council, which bought this and several other key buildings last year from Leisure Parcs.

Why was now the right time for Merlin to take a fresh look at Blackpool?

We’ve always known that the market is here. Sea Life has been here for just over 20 years and it’s been a very successful attraction; year on year it’s steady as she goes. However, five years ago we bought out Leisure Parcs’ stake in Sea Life, and then the council moved in as landlord of the tower and all these other buildings. The tower is one of the most iconic visitor attractions of the UK, and that’s why we were grateful for the opportunity that the council presented to us. Their foresight to get the funds that were necessary to buy these buildings and then once they had done that to go out and find a global operator is why we are here. We’ve got a lot of staff that were shipped over to us, and with our fantastic management team, structure and global brands we can help make these attractions work.

How has Madame Tussauds been received since it opened in April?

We’ve got a survey kiosk in the corner, and I promise you that it’s got the highest KPI [key performance indicator] ratings of all 71 Merlin attractions. When I first came here, there was a lot of negativity. There’s been a lot of bloody noses over the years in Blackpool with so many false promises, you know, the super casino, which didn’t happen and that upset a lot of people. But I kept telling everyone there’s great things coming, and I think now people are proud to have an attraction of this quality.

What changes are you making to transform the tower into the Blackpool Tower Eye?

We’ve got a load of guys up there blasting all the paint off it. It’s all being replaced, a new glass floor, walkway; it will have a new contemporary feel to it, a nicer place to be. When it opens in September, this will be the first Eye to step out of London, but there will be more to follow. I guess the biggest thing we are adding is a 4D pre-show before you go up in the lifts, and it’s going to have a 5D element to it too. I remember being taken to the tower top with my mum and dad as a scrawny little kid, but never returning again. I think a lot of people share that experience and that gives us a real opportunity to get people back by giving them something different. People will want to go up.

Pictured below: An sketch of Blackpool Tower after its ‘Eye’ transformation 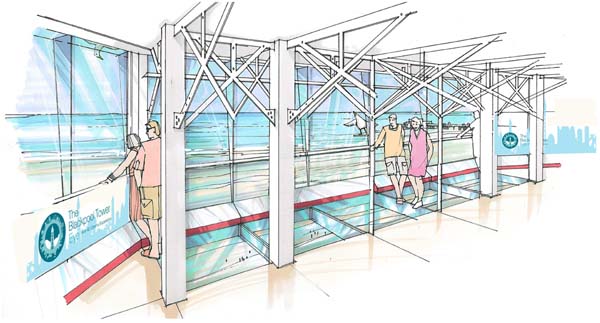 What else will visitors find inside the tower building?

There will be five attractions. As well as the Blackpool Tower Eye, there will be the Blackpool Tower Dungeon, with local legends such Lytham Priory and the Pendle Witches’ trials. Guests will walk though in groups of 35 and it will all end with dead witches hanging in the trees, before you are “hung” on a drop ride. It’s a great way to finish off an attraction – by hanging our guests! We have retained Jungle Jim’s, the kids’ playground, and of course the ballroom and circus. A lot of people of don’t realise that there are some really fantastic architectural gems in Blackpool. I was in the tower ballroom this morning and it’s fantastic, so is the circus. That was crucial to us opening up the building, which will be free to enter when we relaunch in September. You will then be able to decide if you want to go up the tower or visit some of the extra attractions, with a really great value combination ticket on offer. We hope that people will buy into all this and spend longer in Blackpool, which will increase our revenues obviously, but also increase the requirements for beds in the resort.

Why did you choose this mix of attraction for Blackpool?

I guess the simple answer is that it’s pretty much all of Merlin’s brands. We are not doing any theme parks, but for our Midway attractions it’s a fantastic showcase. The one thing we don’t have is a Legoland Discovery Centre, but we have one of those nearby in Manchester and maybe there’s an opportunity for that here one day; who knows?

We have never done a double header opening like this before with the tower and the Dungeons, in fact we’ve never done five attractions in one building before. But it’s not just Merlin’s attractions. I think Blackpool is the only place in the UK outside of London to have so many globally-recognised brands in one area. Most other seaside resorts have only got one or two other brands, this place has got them all. Unlike London, which is so huge, here you can come and walk between all the different attractions.

What do you make of Blackpool’s other improvements and new attractions?

There’s still a lot of work going on along the promenade, but the Spanish steps and the comedy carpet outside are going to look fantastic. You know it’s really good that a lot of the other attractions in the town are seeing the potential and making improvements too. The Pleasure Beach, the Sandcastle [waterpark], the zoo, they are all spending money which is great. What we really need to see following this is the accommodation sector improving its game. Having spoken to a lot of the hoteliers, I think a lot of them are waiting for all the new attractions to open, and then they will spend the cash.

What scope is there for Merlin to expand in Blackpool in the years to come?

Certainly Merlin understands the need to keep developing something new. For instance, the Sea Life centre here has 30% repeat visitors, so it’s really important that you are not showing the same old same old, and we will be doing the same at Madame Tussauds, adding new figures to keep people coming back again and again. However, I would never try and second guess anything this company does. I must admit I switch on the computer each morning and I’m never quite sure what the next Merlin announcement is going to be, whether it’s the cluster in Sydney with some new attractions and a tower, or now Japan. 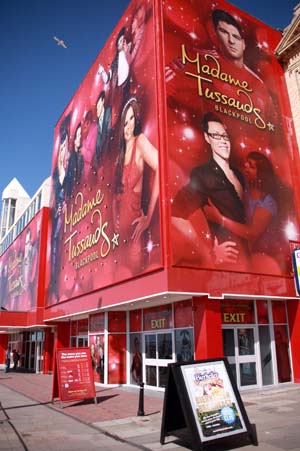