Merlin Entertainments has announced a restructure of its senior management team.

Moving from his previous position as managing director of resort theme parks, Mark Fisher (pictured above) will now serve as chief development officer, taking over the restructured property and development group, which will now be known as Merlin Magic Making. Mark has been a senior director with Merlin since its foundation and has held marketing and operational roles across the group, making him uniquely qualified for this exciting new role. 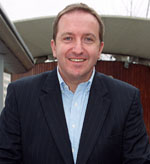 Taking over Fisher’s old role as managing director of resort theme parks, Nick MacKenzie (pictured above) will oversee the properties Thorpe Park, Chessington World of Adventures, Alton Towers Resort, Gardaland, Heide Park and Warwick Castle. Since 2007, Nick served as managing director for Merlin’s property and development group, and will retain responsibility for hotel development as the bulk of this activity is centred on the group’s resort theme parks.