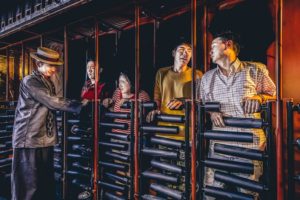 Merlin Entertainments recently unveiled its first Dungeon and Little BIG City attractions in China, located in Beijing and Shanghai respectively. It also chose Shanghai for its first ever Peppa Pig World of Play, taking the total number of attractions it has in the country to eleven. In an exclusive chat with Park World, corporate affairs director, James Crampton reveals more about the thinking behind Merlin’s latest projects and its plans for expansion in new and existing territories.

China is an important market for Merlin; demographic shifts in the country have led to a growing middle class that is seeking exciting leisure experiences. “Our focus up to now has been the rollout of our midway brands in Tier 1 cities,” said James, adding that China was the natural location for its inaugural Peppa Pig World of Play attraction, given the cartoon character is one of the top three ranking pre-school brands in the country. “Following the successful launch of Little BIG City Berlin last year, Beijing was also the ideal location for the second attraction of its kind, given the city’s rich fabric of legends,” he said. 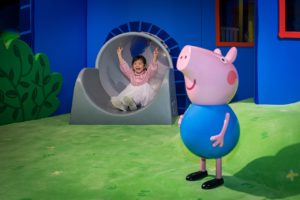 Peppa Pig World of Play in Shanghai is the first indoor attraction of its kind globally and follows on from Merlin’s IP partnership with Entertainment One. The attraction features a dedicated space within a Shanghai shopping mall and follows the creation of ‘in-park’ lands at several of Merlin’s larger theme parks in Europe. The bright and colourful space includes ten play areas, each inspired by instantly recognisable locations from the Peppa Pig TV series.

“This is one of our “Midway” brands,” says James, “with a typical visitor dwell time of 2 to 3 hours and is open all year around. The attraction has been very well received by consumers and the concept is set to be rolled out in additional locations, with launches planned for Beijing as well as Dallas, Texas in the next year, followed by further openings.” 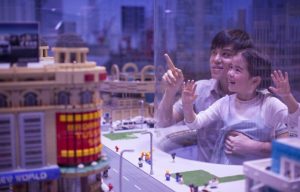 Commenting on the degree to which Merlin has had to adapt its offering to meet the specific requirements of the Chinese market, compared to Europe or the US, for example, James underlined the fact that Merlin’s attractions around the world are designed to cater for the preferences of visitors in that specific location. “A good example of this is LEGOLAND, which is successful in markets as diverse as Denmark, Japan and California. Similarly, Madame Tussauds reflects our deep knowledge and understanding of consumers across a wide range of markets; the mix of celebrities in any location will reflect well-known country-specific celebrities, as well as internationally recognised stars. A lot of planning goes into understanding the market and developing the concepts before they launch. We carefully consider the culture and history of the location before developing such attractions,” he said.

Visitors to Dungeon attractions around the world may associate it with blood and gore involving the dark past of a city. However, in Shanghai because of local sensitivities, Merlin has adapted the concept to be more of a humorous interpretation of history, featuring the mysterious legends of Shanghai.

“Some of our Dungeon brand platforms could not be used in this case, but the Dungeon attractions are about offering an immersive and atmospheric experience based on ‘scary fun’ and this is still very much the case with the Shanghai Dungeon,” said James.

And visitors agree. The attraction, which has had a very positive reception so far, has been marketed as an immersive and interactive experience, which explores the world of colonial-era Shanghai and features a first for a Dungeons attraction – a standing drop ride.

So what’s next for Merlin in Asia? “China is one of our key markets for growth; expansion plans are overseen by John Jakobsen, head of our newest Operating Group – New Openings – responsible for all new attraction openings. As well as a Peppa Pig World of Play set to open in Beijing in the next year, we are currently working on plans for several LEGOLAND parks in the country. During Theresa May’s trade mission to China earlier this year, we also announced plans to open a LEGOLAND Discovery Centre in Beijing in 2019, alongside the existing Madame Tussauds attraction.”

New openings are always on the horizon and Merlin’s aim is to generate a third of its revenue from each of Asia, Europe and the Americas.

It currently has 30 attractions in the UK and 29 in the Americas. Giving Park World a sneak peak of what’s to come, James also revealed plans for further expansion in the US “including the landmark opening of LEGOLAND New York in 2020, which will contain more than 50 rides, shows and LEGO-themed attractions in a beautiful 150-acre landscape just outside Goshen in New York’s Hudson Valley.”

Asked what the future of family entertainment looks like, James is clear Merlin has thought about what is to come and how it can be achieved. “Our unique creative team, known as Merlin Magic Making and headed by our Chief Development Officer Mark Fisher, is continuously exploring major trends which we can see shaping the industry. In an increasingly busy world, with longer working hours and increased screen time, families hugely enjoy focused time together making memories. Both the Bear Grylls and Peppa Pig attractions are designed with this in mind, allowing adults to immerse themselves in the activities with their children. Our purpose is to create unique, memorable and rewarding experiences and we are hugely passionate about enabling as many people as possible to have amazing fun at our attractions.”

Accessibility is also an important part of Merlin’s creative development. “Wherever possible, we will strive to create enabling environments for our guests. From changing facilities and quiet areas to modified ride experiences, accessibility will be an integral part of our operations and factored into our designs and builds.”

“Another important trend is young adults aged 18-24 seeking out thrilling experiences with a focus on self-improvement”, says James, “which is why we have partnered with Bear Grylls and created an adventure park in Birmingham, allowing guests to try diving, rock climbing, indoor skydiving and experience the highest free-roam high ropes in Europe.”

“We have plans to expand the concept to other geographies, including China and the US, where Bear Grylls has a large following. As of June this year, he had 60.7m TV viewers in the US and 290m in Asia.”

It will be interesting to see what this global leader in location-based, family entertainment has up its sleeve next – watch this space