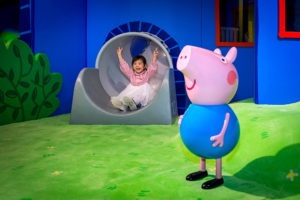 Merlin Entertainments has unveiled its first Dungeon and Little BIG City attractions in Asia and the inaugural Peppa Pig World of Play, as part of a continued expansion in the Chinese market. The company now has eleven attractions in China.

The Shanghai Dungeon opened its doors to a new kind of attraction, based on the city’s old urban legends. Located on the popular NanJing Road, the attraction, which also includes the first standing drop ride for the Dungeon brand, brings to life Shanghai’s past with shock and entertainment.

“Traditionally the Dungeon brand has been associated with blood, gore and ritual humiliation of visitors,” noted Ben Sweet, Merlin’s new Openings Director for Asia, “but going to China, all of these elements have their limitations, so we’ve adopted a different, humorous interpretation of history involving the mysterious legends of Shanghai which our guests absolutely love.”

Shanghai was also chosen as the first location for Merlin’s new Peppa Pig World of Play, a unique indoor attraction, following the company’s IP partnership with Entertainment One. The bright and colorful space features ten play areas, each inspired by instantly recognizable locations from the Peppa Pig TV series. It will be open all year round and extends Merlin’s participation in the pre-school market. The Peppa Pig concept is set to be rolled out in additional locations, with launches planned for Beijing as well as Dallas, Texas, in the next year, followed by further openings.

Little BIG City Beijing is the second attraction of its kind to be developed, following the successful launch of Little BIG City Berlin last year. The interactive handcrafted miniature attraction takes visitors on a journey through a thousand years of Beijing’s history in a day, depicting the city’s iconic buildings and streets in startling detail using cutting-edge technology.

During the UK Prime Minister’s trade mission to China earlier this year, the company also announced plans to open a Legoland Discovery Centre in Beijing in 2019, alongside its existing Madame Tussauds attraction. Merlin is also in advanced discussions to open a number of Legoland parks in the country.

“China is an important market for Merlin as we continue our strategy of geographic diversification,” added John Jakobsen, Merlin’s Chief New Openings Officer. “It provides great opportunities for us to develop existing attraction concepts, as well as introduce new brands. These new openings together with additional roll out of Midway brands and rapidly developing plans for new Legoland Parks, help Merlin serve the increasing appetite of Chinese consumers seeking a more interactive, immersive and better-quality entertainment experience.”