Phantasialand’s head of marketing, Birgit Reckersdrees, explains why the German’s park’s new attraction – a mix of dark ride and high-tech shooting gallery – is perfect for all the family.

At Phantasialand we always want to make special, unique rides that you cannot find in other parks. For example, even though we have a Top Spin (Talocan), is not just the technology; we do it do it with fire, steam, water, and theme the whole area around the ride. Now you find a lot of people in Germany when they see a Top Spin are not calling it a Top Spin, they are like, “Ah, this is a Talocan.”

Our park’s owner, Robert Löffelhardt, decided it was time to do something that would bring the whole family together and make then smile. We wanted to create an interactive dark ride, but it could not be too “dark”; it had to be something that had the fun factor.

Mr Löffelhardt was talking to Roger Houben (3DBA), and said he needed someone very creative and flexible to make the ride. Fortunately Mr Houben knows that we have a very high quality level at the park, that we always want a little bit more, and I think we signed the contract one-and-a-half years ago.

Maus au Chocolat is both a ride and game, and you are part of the story. Inside the ride are seven screens with a 3D movie effect, which you must shoot at, and there is always something new on the screen. We have also done a lot of theming and decoration, because the atmosphere inside must feel right. 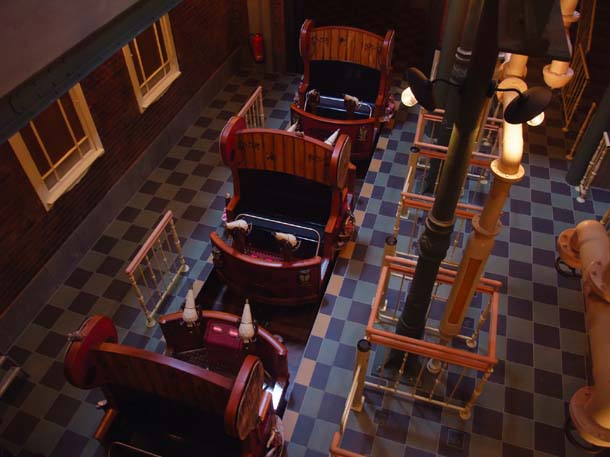 The target group for the attraction is very wide. You see a lot of father and sons going on for the game and the battle, but I have a little niece who is five years old who is not so interested in battle. She said, “It was so nice when the mice were dancing and at the end it was snowing!” She loved it and it a put a smile on her face.

We had amazing fun with the story. It’s set in the middle of 1920s Berlin with a very proud second generation baker, Gustav E Lehmann, who is famous for his tortes. When you come in to the attraction, the whole area is themed and it’s like walking into a real cake factory. One night Mr Lehmann realises his whole factory is full of mice, so he calls Oskar Koslowski the pest controller. Mr Koslowski has been a long, long time in his business so he knows it is not good to use poison because you would poison the cakes as well, so he takes out some icing bags filled with chocolate cream. Even for Mr Koslowski there are too many mice, and this is where our guests come in, as exterminators. It’s fun shooting with the icing bags, and you don’t have an aggressive shooting feeling; it’s just like icing a cake.

The ride’s name is a mix between the German word for mouse (maus) and the wonderful, rich in calories but so sweet and delicious, French dessert Mousse au Chocolat. It’s a great fit: a mouse on top of the chocolate mousse! 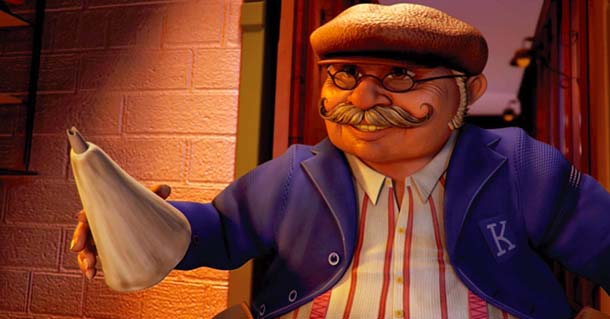 We got the company that made the animations for the ride to make some special images for TV, because this is not an attraction you can explain easily in the marketing. It’s not like a rollercoaster where you can say that the first drop will be so big, there will be a camelback and some other elements, and everyone can imagine what it will be like. If we tell someone that they will be hunting a little mouse with chocolate cream, it sounds crazy doesn’t it? However, when they see the film and the characters they will see that it’s funny and become interested.

Since we opened the ride in June, our guests love it. Even people that have ridden [Disney’s] Toy Story Mania say that from a technical point of view and also for the decoration and the ambience, Maus au Chocolat is better. I would agree! The story is original and it is so funny with Oskar Koslowski, he is a real character.

We have done some ringtones with Mr Koslowski that our guests can download to their smart phones and they are all laughing because of his Berlin accent. On Facebook our guests are sharing their scores with their friends. All this is good marketing for us. The attraction also has high potential for merchandise because everybody loves Mr Koslowski and the mice and want to take them home.

The ride has been open now for a few weeks. At first we got a few teething troubles, but this is normal when you have something new and very complex like this. We had a very good working relationship with Alterface and ETF, and when there were problems they always came up with ideas. Now we are into the summer holidays, it is a reliable ride. We are very happy that we have found another creative, special attraction for our guests! 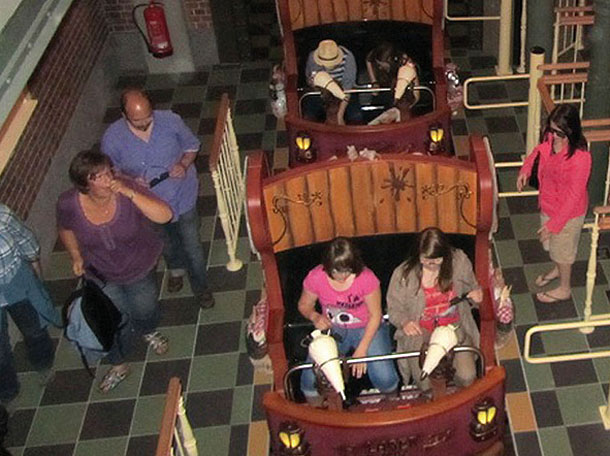 Maus au Chocolat was created as a turnkey concept by 3DBA (3D Branded Attractions), using ride vehicles and track by ETF Ride Systems and interactive technology by Alterface. The 3D ride film was produced by Riva Digital in Dubai with direction from the creative team of Phantasialand. Theming of the attraction was completed in-house by Phantasialand.

Although the ride is heavily themed, the media content is easily changeable and updatable. Here are some other facts and figures associated with this exciting attraction:

•Ride time: 6 minutes+ (7 scenes of approx 30 seconds shooting plus 14/15 seconds to move from scene to scene) 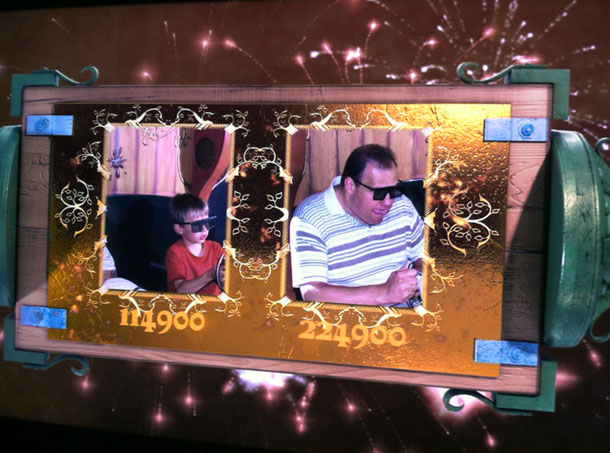 Riders on Maus au Chocolat begin the experience by passing through a set of double doors that part to reveal the first of seven screens with scenes projected in 3D. The action starts at dusk as passengers find themselves in the accounts office. A scared accountant is running after the mice and holds up a target for the riders, but the mice keep taunting the players and getting in the way.

In scene two, riders find themselves in the storage room where mice can be seen playing among bags of flour, nuts, cake tins, wooden boxes and other props. Scene three is the kneading room, complete with a tiled floor and art deco walls. A mouse is hiding in a ladle and guests must take aim at him and the other rodents causing havoc in among the bubbling chocolate, caramel and marshmallow.

Valves, switches, wheels and pressure gauges create a frantic backdrop to scene four, the baking room. Mice are running around opening valves and pushing buttons, all you have to do is stop them with your trusty icing bag. A wedding cake ready for decoration awaits riders in scene five, the finishing room. Standing on the conveyor belt are some more of those pesky mice, with their mouths open ready to taste the taste the chocolate cream.

As two more sliding doors open to reveal the cold room in scene six, passengers feel a blast of cold air in their face. This Christmas-style scene may look nice, but it’s also the winter playground of the mice. Additional targets here include ice sculptures. The final scene is set inside the pastry shop, where the finished cakes are on sale …if the mice don’t get them first. At the end of the ride, a Hall of Fame displays the best scores, together with pictures of the riders, which are available for purchase of course.

Pictured below: Some scenes from the ride 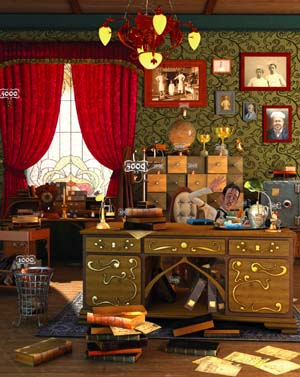 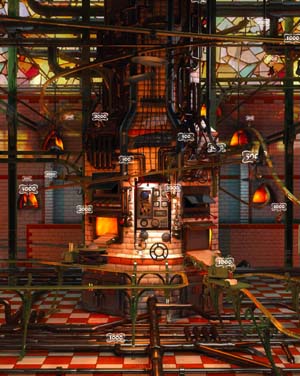 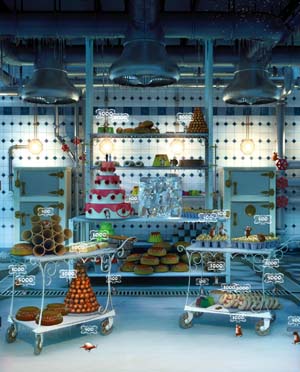