It’s now five months since Ferrari World Abu Dhabi opened its doors. Featured among the park’s 20 rides and attractions is a unique Racing Coaster from Maurer Rides. Read on for news of this and another Maurer launch coaster coming soon.

Fiorano GT Challenge simulates a race between two Ferrari F430 Spider cars on parallel tracks. The experience starts beneath Ferrari World Abu Dhabi ‘s (FWAD) big red roof, but soon escapes outside into the heat of the desert as each of the ride’s trains are launched into over 1km of twisting, turning track.

Fiorano GT Challenge is a new type of rollercoaster – without inversions or extreme heights but challenging, exhilarating and fun. Multiple starts, stops and launch sequences add to the ride’s intensity. Passengers accelerate into the hairpin curves and this combined with authentic engine sound effects really complete the “real race” experience.

Each track has four LSM (linear synchronous motor) acceleration points and each three-car train reaches speeds of up to 95km/h during the 90-second ride. Only the ride operator knows the winner of each race, which is chosen by a random computer sequence.

“The status symbol Ferrari represents perfection, elegance and emotion. That is why it was an exceptional challenge to transport these values to this Racing Coaster,” notes Maurer Rides managing director Horst Ruhe. “However, delivering first-class quality and premium design is a matter of course at Maurer, and the teamwork with Ferrari, Aldar [FWAD developer] and Jack Rouse Associates [the park’s designer] was very co-operative.”

In his 100-day report back in February, FWAD general manager Claus Frimand was very positive. “Hundreds of thousands” have visited the park since the official opening in November, he said. “Ferrari World Abu Dhabi has exceeded all expectations, confirming its position as the strongest attraction and the most exciting experience here in Abu Dhabi.” 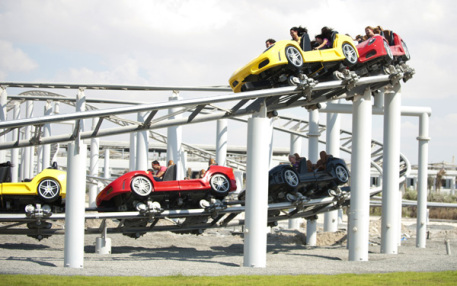 Rides like Fiorano GT Challenge, which celebrate the passion, performance and legacy of Ferrari as well as motorsport in general, are part of that success. Extensive FWAD coverage can be found on the Park World website (www.parkworld-online.com), in the meantime Maurer is keen to stress that LSM coasters are now an affordable option for parks of all sizes.

“Good coaster concepts are no longer enough for success, they have to make economic sense too,” says Maurer Ride’s Torsten Schmidt. “Numerous attractive features packed into minimal space are an attractive option for smaller parks.”

“In addition to the space and purchase price, running expenses are another aspect of profitability,” continues Schmidt. “Maurer Rides uses modern LSM power for launch coasters like Fiorano GT Challenge, with well-engineered energy storage systems that make it possible to recharge the energy needed for the launch, thus keeping the power usage low.”

If you are in Dubai or Abu Dhabi, be sure to head over to Ferrari World and check out Fiorana GT Challenge for yourself.

Bayern Park – ready for the launch

Maurer Rides will open nine new rollercoasters in 2011, including a brand new launch coaster in Germany. Described as, “a coaster of epic proportions,” Freischütz (Freeshooter) at Bayern Park in Reisbach, Bavaria, will feature the most inversions for any park coaster in Germany (five).

Freischütz will be notable, too, for its layout. The 480-metre-long ride is being seamlessly integrated into the steep hillside terrain around Bayern Park, with highest point of 24 metres above ground on the hillside actually being 35 metres from the foot of the hill. Numerous crossovers, intersections and overlaps will provide a compelling sight for spectators.

Freischütz will be the first Maurer coaster to use X-Car ride vehicles complete with “Fire Wheel” LED light effects. It will also feature a FlyingLauch, a function that allows the ride operator to accelerate the train through the station by reversing the polarity of the brake magnets. When the train finally does come to a stop, the braking energy will be recovered and reused for the next thrust start, enabling energy savings of up to 30%. 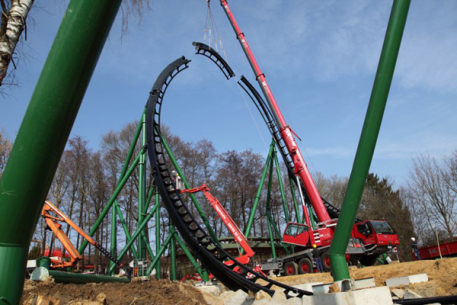