Marjorie “Marge” (Westwood) Chance passed away on March 15, 2018. Marjorie and Harold Chance were married for 63 years before his passing in 2010. 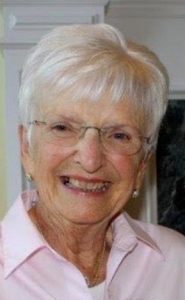 She was by his side when he founded Chance Manufacturing Company in 1961. Harold and Marge raised five children while building what would become America’s largest amusement ride manufacturing company. When Harold retired from the company in 1985 his son Richard Chance took over the family business. Marge was instrumental in the early days of the family’s ventures into the amusement industry. Harold had purchased a traveling carnival in 1954 where Marge operated the cotton candy wagon. Harold learned some very valuable lessons in those carnival days that served him well as he really invested himself into the manufacturing business. He was able to revolutionize the carnival industry by inventing the trailer mounted amusement ride, which made the process of setting up, taking down, and transporting carnival rides much faster and more efficient. None of Harold’s success and strong relationships could have been built without the support of Marge along the way.

Once they had sold off the carnival business and got settled back into life and work in Wichita, Kansas, Marge became very involved in humanitarian efforts. As a nursing school graduate, she was drawn to efforts of caring for people. She was the first female to become the President of the St. Francis Hospital Board of Advisory Directors. She was instrumental in growing the nursing program for Newman University when she was able to connect them with the nursing program at St. Francis Hospital. She and Harold were also very active members at Rolling Hills Country Club and were involved in several local charities.

As the Chance Manufacturing Company began to celebrate more success Harold and Marge fell in love with a vacation destination that ultimately became their second home in Treasure Cay, Bahamas. Even after Harold’s passing Marge continued to spend about six months of the year living in their Bahamas villa.