Hulk is causing havoc on the streets on London, and the results are breathtaking! Park World visits Madame Tussauds to experience Marvel Super Heroes 4D.

, the biggest new attraction to open at the original Madame Tussauds in over seven years, brings a crack team of Marvel Super Heroes – Hulk, Captain America, Iron Man, Spider-Man, Wolverine and Ms Marvel – together for the first time in 3D form, on screen and in wax.

Spread across three floors of the London venue’s domed “Planetarium,” guests enjoy a bespoke 4D experience complemented by wax figures and interactive exhibits. Marvel Super Heroes 4D opened this summer and is available as an added attraction to Madame Tussauds ticket holders at the end of their tour.

The 9-minute-long computer animated film at the heart of the experience was produced by Threshold Animation Studios of California, working in close collaboration with Marvel. Threshold, together with Kraftwerk, which supplied the theatre’s seats and hardware, were brought on board by 3DBA.

Exploiting Tussauds’ reputation as a tourist magnet, the film features London landmarks such as Buckingham Palace and Big Ben, as well as a London taxi and double decker bus, all of which come in for some explosive action at the hands of Hulk and his friends.

“Madame Tussauds had a basic concept in mind in which they wanted the superheroes to save London from a giant robot,” explains Threshold Animation president Joshua Wexler. “My writing partner Robert Henny and I began to expand upon it and sat down with Marvel to discuss which characters would be best for the film and who might be a great villain.”

The superheroes arrive in the capital to receive special bravery awards from the queen only to find the city under threat from evil genius, Doctor Doom. The deadly doctor is intent on destroying the superheroes and their secret command centre and has created an army of lethal robotic accomplices to help him. As has become something of a tradition in hisfilms, Marvel fans should also listen out for a sneaky cameo voiceover from Stan Lee.

Responsible for the blockbuster computer game franchise Mortal Kombat, Threshold has been producing theme park attractions for over a decade, including Mission: Space at EPCOT, Star-Trek Borg Invasion for Paramount Parks and Legoland’s Bob The Builder 4D and Clutch Powers 4D Adventure. The company has pioneered several 3D techniques over the years, and even had a hand in developing the camera system used to shoot the blockbuster Avatar.

“We really try to push the boundaries of what can be done and we found that the Marvel character’s attributes and abilities lend themselves perfectly to a 3D environment,” says Wexler. “Just imagine what you can do in 3D when characters can sling spider-webs, rocket out of the screen, extend claws, hurl spinning shields or when a green giant sneezes in your face!” 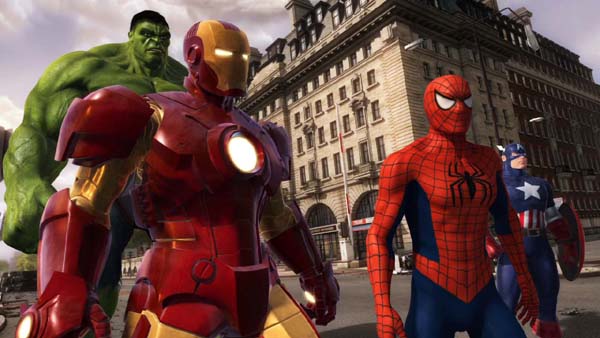 “The show’s incredibly tight production schedule of six months necessitated constant contact with the Marvel team,” adds Wexler. “If we had worked any closer we would probably have to be surgically separated! Since this was the first time they were going to appear together in stereoscopic 3D we felt it was incredibly important to make sure every detail and nuance of these iconic characters was accurate before we went into production.”

“We’re delighted with the results,” confirms Madame Tussauds London general manager, Edward Fuller. “The 4D film action spills out of the screen right over the audience. Every centimetre of the huge dome is fully utilised and people are absolutely loving it.”

This being Madame Tussauds, the Marvel Super Heroes experience would not be complete without some wax figures, and an interactive exhibit area is on hand for guests to enjoy at their leisure before the enter the 4D theatre.

In the centre of the room, a very angry Hulk stands 4.5-metres tall, as seen above. Nearby, showing off his amazing arachnid powers, is Spider-Man in an upside down office scene. Have your photo taken next to Spider-Man, however, and it looks as though you are climbing the walls with him! The figures of Wolverine and The Invisible Woman, portrayed by Hugh Jackman and Jessica Alba respectively, are also featured. On the next level, linked by the Heroes Gallery, guest can encounter Iron Man and Nick Fury, as portrayed by Samuel L Jackson. 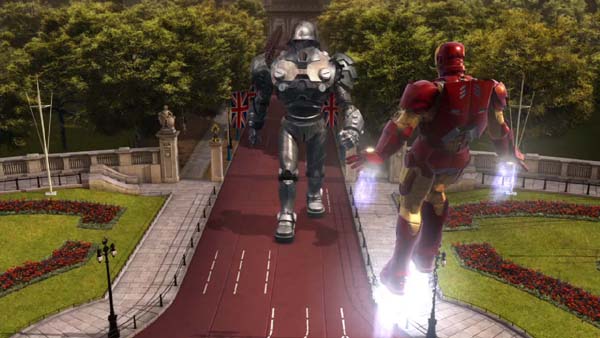