Thrill rides and sea life? John Holer’s Marineland in Niagara Falls, Canada, might not be the only venue that mixes animals with amusements but he’s been doing it longer than most – and it works. Gary Kyriazi discovers a winning combination in Niagara Falls, Canada.“People think I’m crazy,” John Holer advised me with a dismissive shrug, “but I don’t care what people think. I know what I’m doing.”

If 75-year-old John Holer is crazy, he’s crazy like a fox. What he’s been doing with Marineland for the past 50 years continues to work well, defying the standard rules of the amusement industry. One rule, however, has always guided him: being passionate about what he does.

“From the start,” he points out, “my vision for Marineland was to create a place where people would be able to get as close to animals as possible. People are fascinated by animals and have a great desire to learn about them.”

Okay, that’s not so unusual. Many people share Holer’s passion, and the success of the many marine parks around the world has proven this. Marineland of Florida was the first of the large sea life parks when it opened in 1938, and Marineland Of The Pacific in Southern California opened in 1954 as the largest oceanarium in the world, its success aided in no small way by the opening of nearby Disneyland the following year. The non-zoo-like, close-up environment of these sea life parks set the stage for the various Marine Worlds, Sea Worlds and wild animal parks that would mirror the theme park rush of the 1960s.

So what makes Holer’s Marineland stand out? He added thrill rides.

What? Thrill rides in an animal park? That’s breaking an amusement industry rule. Thrill rides belong in an amusement park, animals belong in an animal park. (Interestingly, America’s first enclosed amusement park, 1895’s Sea Lion Park at Coney Island, was in fact a sea life attraction with thrill rides – including the first Shoot-the-Chute and America’s first loop coaster, the Flip-Flap – but when it morphed into the legendary Luna Park in 1904, the animal acts were through.)

I reacted to the animal/thrill ride mix as the rest of the industry did when, in 1981, I joined the Arrow Development Company, which at that time was Arrow Huss. Holer had just signed a contract for what would be the world’s longest steel coaster at 5,500 feet long. After I shook off the incongruity of such a ride at an animal park – after all, a sale is a sale – I visited John at his beautiful park and he walked me around the proposed coaster’s route.

“You see, my park is a family park,” he explained with his usual passion, “and I don’t want to separate the family members, not even for a roller coaster. So, see that hill there?” he pointed. “The coaster’s lift, I’m going to call the coaster Dragon Mountain, will follow that hill up so guests who don’t like heights won’t be so frightened. They’ll never be more than just a few feet off the ground as they climb 80ft. Then, they’ll drop into a double-loop. They won’t even see the loops, and won’t even think about it, until after they’ve passed through them.”

He then walked me to where the coaster train would perform a three-level spiral downward into an exploding volcano, complete with lava flow and a 15ft tall animated dragon in the middle. Exiting the volcano, rider would take a casual, flat route towards a one-third scale working facsimile of Niagara Falls, for a trip behind the falls. The train would continue its flat route through a 1,000ft-long tunnel, and then – as unexpectedly as the initial double loops – go into a bow-tie element (a variation of Arrow’s boomerang element), before continuing its flat route into the station. It seemed to promise some kind of combination of a mild scenic railway and a multi-loop steel coaster. Would such a ride work?

I didn’t find out until almost 30 years later when I finally rode Dragon Mountain (pictured, top of page). Yes, it works. Coaster critics call it “quirky,” “unusual,” “entertaining,” and always “unique.” The exploding volcano, the dragon, and Niagara Falls were never completed; the train goes into an empty volcano, and passes over a rock cliff over which the falls would tumble. Holer ultimately realised the expense of these effects and good-naturedly gave them up. Such a coaster hasn’t been done since, but at Marineland all ages ride it, and all ages are satisfied with it. John Holer knew what he was doing, even if Arrow and the rest of the industry didn’t.

“It’s all about keeping the family together,” he repeated as he gave me a tour of his park in the summer of 2010. “So I space the rides between the animals, to keep the experience varied and interesting.” Between the large coves and natural land exhibits featuring killer whales, beluga whales, dolphins, walruses, buffalo, black bears, elk and red deer, stock rides are strategically placed. The majority of the rides are German, their coaches re-themed as animals, and they’re all purchased with careful thought, maintaining the family togetherness. But even John Holer has had some second thoughts, as he pointed out one of his newest purchases, the Topple Tower from Huss. “It’s not a overly wild ride,” he points out, “but it looks worse than it is, tipping back and forth like that 70ft up in the air. It’s intimidating to our older guests.”

While the same could be said for Marineland’s newest major ride, S&S Power’s Sky Screamer, which offers a view of Niagara Falls before plummeting 300ft, Holer says “that ride has been very good for us.” So once again, it works.

There are long walks between the rides and attractions, and parents with young children would be wise to bring wagons of some type for post-stroller children (“Dolphin Carts” are available for rent). The long hike up a hillside to the Sky Screamer might be overdoing it for a tired family of children and oldsters, and as such John is considering installing a conveyance system throughout the park.

“The walks are long, especially on a hot day,” he concedes, “and have become more so as the park has grown. So we’ve got to make it easier to get around. I’m thinking of trolley cars; they’d be both fun to ride and convenient.”

In the meantime, construction is underway on Marineland’s largest expansion ever. River Country will have a 2.5 mile (4km) train ride to carry animal watchers through its open 400-acre site, as well as a river ride. An opening date isn’t set yet.

The challenge Holer has faced since 9/11 is the tightening of the US/Canadian border. It used to be effortless for an American family to cross from New York state into Niagara Falls, and a one-day outing at Marineland was commonplace. Now, it’s a considerable chore that requires passports. As such, Holer is concentrating more of his advertising and marketing dollars in the Canadian domestic market, stretching beyond Ontario and into Quebec, concentrating on Montreal in particular.

While John Holer has a passion for the amusement industry, and always keeps his guests in mind, it’s the animals that remain his primary focus. As with any wild animal park, the veterinarian staff has a one-on-one relationship with each animal.

“I’ve spent my life to developing one of the world’s best facilities for animal and marine mammal care,” he says with unswaying dedication. “At Marineland, guests can learn about animals through an exciting mix of entertainment and education. My staff members and I consider each animal a member of the family, and I’ll spare no expense when it comes to their health and well-being.” 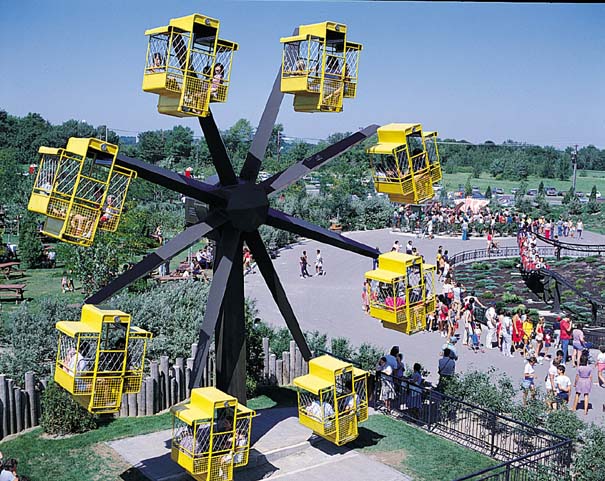