The man spearheading the development of multiple branded attractions near the Malaysia/Singapore speaks exclusively to Park World.

Established by the investment arm of the Malaysian government in 2009, Themed Attractions and Resorts and its sister company Destination Resorts exist to develop new, world-class attractions to stimulate the country’s leisure and tourism industry. The first of these, Kidzania in Kuala Lumpur, opened this February, while further branded attractions set to debut in the next few months include Legoland Malaysia, Sanrio Hello Kitty Town and The Little Big Club. A key area for much of the development is the special economic zone of Iskandar in south Johor – right on the border with Singapore, from where Themed Attractions hopes to attract many of its visitors. Ahead of the opening of Legoland Malaysia on September 15, Park Word talks to Themed Attractions CEO Tunku Dato’ Ahmad Burhanuddin. The 50-year-old former banker also serves as deputy president of the Malaysian Association of Amusement, Theme park and Family Attractions (MAATFA). 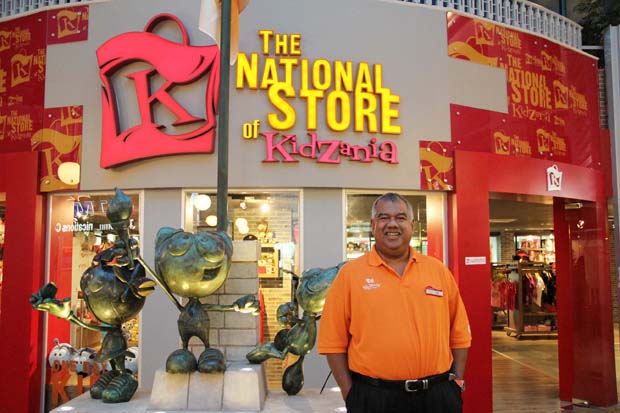 Why did the government choose to invest in Themed Attractions and Resorts?

II think it’s fair to say we previously undersold the tourism and leisure offer we had in the country, compared to our neighbours in Singapore, Thailand and Indonesia. We have a lot of natural resources – the jungle, the sea, the mountains – as well as great cultural resources and heritage and a fantastic climate. There is also a perception that Malaysia is a very safe destination.

People like to come from China and India, the Middle East because we have a large Muslim community and, because we are part of the commonwealth, there are lots of British and Australians coming too. So there were already a lot of tourists coming but there weren’t sufficient tourism products and attractions for families and children, which would keep people for longer stays and spending in the country. That was the main reason for the development of Themed Attractions and Destination Resorts.

There are a lot of people talking about doing a lot of things, but once they get to the feasibility study stage they cannot get it off the ground because they cannot get the investment. Outside of Kuala Lumpur, it is only at the weekend that you get huge numbers of people going to the theme parks.

We are not here to compete with established attractions. Instead, a bit like like Star Trek, we want to boldly go where no one else has gone before! And because the attractions we develop should benefit the entire nation’s economy, it will be a worthwhile investment for us. 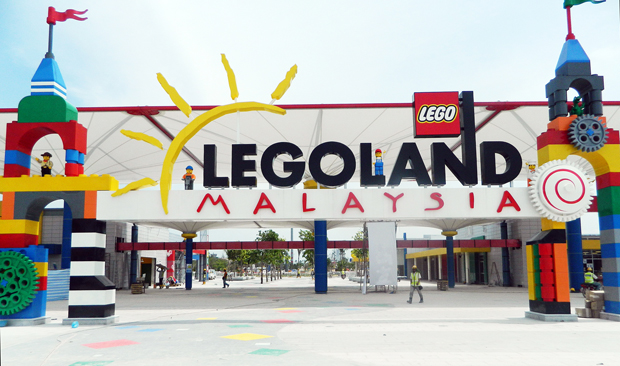 Why is now the right time for all this new development?

First we wanted to get the infrastructure sorted and with Iskandar, a development region about three times the size of Singapore and twice the size of Hong Kong, we have that.

Another reason is that this will create jobs. A lot of Malaysians were moving away because there weren’t the opportunities here for them to do this kind of work; we were losing a lot of people to Singapore, even Hong Kong and Macau. When we opened KidZania it was interesting how much talent was available.

Why did you chose KidZania as the first attraction?

As Themed Attractions is a sovereign investment fund, it was very important for us to do something for the country first. KidZania is all about entertainment and education, so in Kuala Lumpur we have created somewhere that is of benefit to all Malaysian families with children. We are now all very excited about KidZania Singapore, which will open at Sentosa Island in 2015. 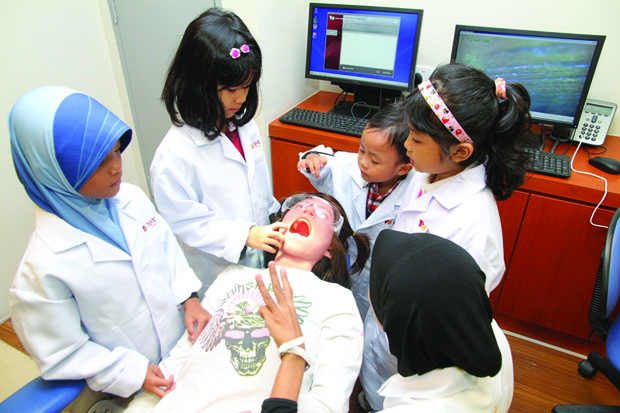 How will the attractions in Iskandar/Johor complement the tourism offer in Singapore?

For people wanting to spend a bit more time after visiting Singapore there were not really the opportunities for them. Johor is a unpolished jewel with huge potential, and we have a lot of land, real estate and development potential. We will both supplement and complement what is on offer in Singapore.

I read an article that described the region as the Orlando of Asia. I think we will both be happy if we become that. For Singaporeans it will be great, they can have day trips over to Malaysia, and for someone on a stopover in Singapore they can bring their family and have a holiday on our side.

Where else are you targeting?

Indonesia is very close, Thailand is only an hour’s flight away, Vietnam, the Philippines; they are all close. Even Korea, China and Taiwan are possible markets. All of these places have local airlines that fly to Malaysia and our own regional airport at Johor Bahru.

You have engaged a lot of international brands for the first round of development. How have you selected this mix of attractions?

Legoland will be the first in Asia. There are already a few Hello Kitty and Thomas attractions in Japan, but nevertheless Sanrio Hello Kitty Town and The Little Big Club are comparatively new. We are also developing LAT’s Place where visitors can be thoroughly entertained inside the world of internationally renowned cartoonist Dato LAT’s famous Kampung Boy (Village Boy).

Right from the start when were looking at the types of attractions we needed, we thought that in order to attract family groups we needed products that would encourage them to travel. When it comes to kids, they have a high recall of things they see on TV, like Barney, Bob the Builder, Pingu and Thomas – all of which will be featured at The Little Big Club. Lego’s great because children like to build things and be creative; the same with KidZania. That’s why we went for brands that appeal to families with children and provide them with immersive, educational yet entertaining experiences.

What about your own branded attractions?

We are creating some new attractions of our own like Malaysia Truly Asia near Kuala Lumpur, where we are working with international and local partners like Hetemma, Thinkwell and BRC to come up some unique concepts.

We are also planning a waterpark called Ocean Splash Water World on the Desaru Coast. Then there’s Ocean Quest, which we are working on with Dolphin Quest, which has high credibility and capability in terms of dolphin and animal care. It wasn’t so necessary to leverage their branding, but we wanted their expertise and knowledge transfer. Getting the experience of partners like this is very important to us as a company still quite new to the industry.

What is the concept behind Malaysia Truly Asia?

It’s going to be an immersive cultural attraction, a place where all six senses are stimulated – the nation in a nutshell. There are a lot of people that stopover in Singapore or Malaysia on their way to Australia. We can organise a transit trip for three hours, allowing them understand what Malaysia is all about. I wouldn’t say it’s the ultimate way to see the country, it’s just a taste, but we hope that after that they will to come back and stay for three or four days, a week or more.

What other new attractions can we expect on the horizon?

There is always the possibility of new attractions, however I think that our stakeholders, including Khazanah Nasional Berhad (Malaysian government investment arm), want to see that we are successful in what we do. We are currently preparing new attractions every six months and we want to get these ones right first, but I think we’re off to a good start. After KidZania, where we proved that we could deliver on time on budget, we got a bit more traction, and I expect that to continue with the opening of Legoland. 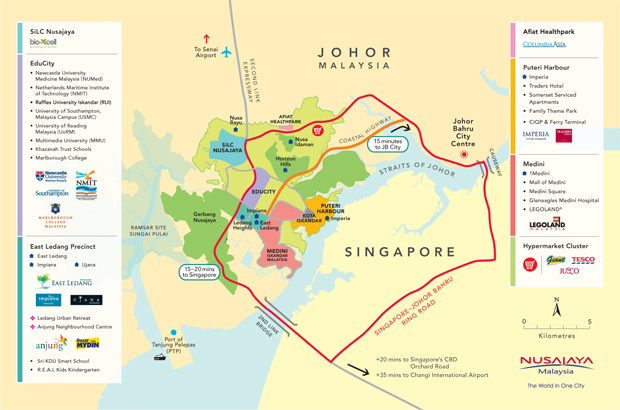 A map showing the scope of development in Nusajaya

Following the launch earlier this year of the kids’ role-playing attraction Kidzania in Kuala Lumpur, Themed Attractions and Resorts is now moving ahead with the opening next month of Legoland Malaysia in Nusajaya. Developed in partnership with Merlin Entertainments, the new park is the first of what will be many attractions in Iskandar, Johor – close to the border with Singapore.

More international brands will arrive in mid-November at the 80,000 sq ft Puteri Harbour Family Theme Park, home to Sanrio Hello Kitty Town, the first Hello Kitty attraction outside of Japan, and The Little Big Club, the first of its kind in the world. Developed in partnership with HIT Entertainment, the latter will feature five characters under one roof namely Bob the Builder, Pingu, Angelina Ballerina, Barney & Friends and Thomas & Friends. Visitors to Puteri Harbour Family Theme Park will also be to meet Kampung Boy, the creation of Malaysian cartoonist Lat, who will come to life at Lat’s Place, a themed live animation and dining experience.

Featuring 17km of sandy beaches less than an hour from Singapore/Johor, Desaru Coast will be positioned as a luxury tourism destination. Attractions will open in stages starting in 2015, including the Ocean Splash Water Park, Ocean Quest marine life encounter experience and two world-class golf courses. As part of the development, Themed Attractions’ sister company Destination Resorts is developing four luxury resorts as well as a conference centre and shopping mall.

Opening in the capital city of Kuala Lumpur in 2015, Malaysia Truly Asia will represent the country’s cultural highlights and gastronomic delights in an immersive two-to-three hour experience. The aim of the attraction is encourage transit passengers passing through Malaysia or Singapore to come back and enjoy a longer stay and sample all that the nation has to offer.