Holiday Park manager Bernd Beitz discusses how the intellectual properties of Studio 100 are now leading the development of this popular German amusement venue.

The introduction this season of Maja Land, dedicated to the character Maja the Bee, is part of an ongoing €25 million investment by Plopsa Parks/Studio 100 since the Belgian firm acquired Holiday Park from the Schneider family in November 2010.

I started at Holiday Park in 2002 as an assistant to the operations manager, and one year later I became the operations manager. So I know the park as a family-operated business, and now as part of a group. It is very interesting to see it from both sides. Plopsa tried to work as much as possible with the people who were already here. That way we combine the experience of 12 years of Plopsa in Belgium and the Netherlands with some employees who have 30 years’ history here in German theme parks.

Immediately after Plopsa came in, we started taking down the really old parts of the park, like buildings that were not really in the style we would like to offer to the customers anymore. For the 2011 season we added five small rides, the type of rides you could put in over one winter without much planning, because there wasn’t much time for ordering attractions. We put in Flip der Grashüpfer (Filip the Grasshopper) by Metallbau Emmeln, Blumenturm (Flower Tower) by Zierer and Die Frösche (The Frogs) by Zamperla. We also added a children’s driving school in front of the Wild Mouse and rethemed the oldest attraction in the park, the Anno Tobak canal boat ride, as Tabaluga’s Adventure.

Five rides in one season is quite a lot, but the real investment was this winter with Maja Land and the new entrance. The entry to the park used to be on the main road. This meant to get from the parking lot to the front gate you had to walk along the street, which was not so nice with all the traffic.

So we moved the entrance and created a kind of Main Street with shopping, games and food, as well as some fountains we already put in last year. This area, now known as Fontänenplatz, is connected to Maja Land. You can see when people arrive that haven’t been to Holiday Park for a while; they really stop and look. I think you can clearly see that this is of a different quality to some other parts of the park, which we will continue to improve in the coming years. 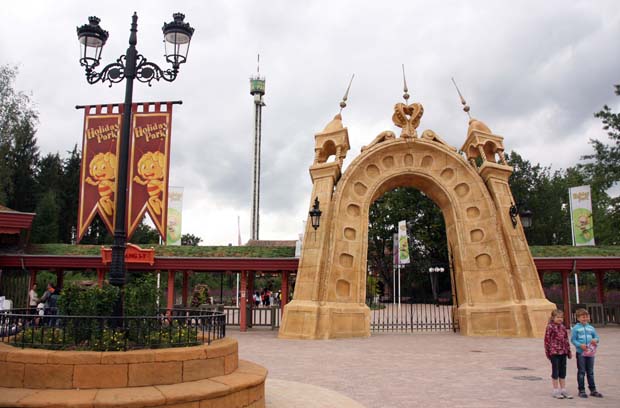 The new park entrance introduced for 2012

Maja Land covers 15,000 square-metres and features 11 rides and attractions that can entertain up to 2,500 guests an hour. This area, which sits to the right of the new entrance as you enter the park, used to be called Blumenpark (Flower Park), one of the original areas of Holiday Park. It was really just a zone with flowers, nature, a restaurant and some smaller attractions but it was a little bit old; the restaurant had been closed for several years. As we were lacking children’s rides, and because Maja Land had already been a big success as in indoor attraction at Plopsaland in De Panne (Belgium), we decided to do it here, only outside.

The new area has been designed by Piet de Konnick, art director for all the Plopsa parks, and was built in-house over a five month period. As you would expect, there is lots of theming with many flowers. It will look even more beautiful in the years to come when the real plants and landscaping are fully-grown.

We didn’t really have to think hard about what rides to choose because we already knew what was popular from De Panne. Maja’s Blütensplash (Zierer Flying Fish), Blumenturm (Zierer Family Freefall Tower), Verrückter Baum (Zierer Kontiki), Die Frösche (Zamperla Jump Around), Schmetterlingsflug (Zamperla Flying Bikes) and the leaking bucket feature are all the same as De Panne. Plopsa works a lot with Zierer, it has a good experience with their rides and their support, and both Plopsa and Holiday Park already have some very nice rides from Zamperla.

The Mini Cars (Ihle mini bumper cars) and three little Zamperla rides – Willie’s Flossfahrt (raft ride), Bienchenwirbel (spinning cups) and Lara’s Marienkäferflug (flying beetles) – were already at the park, but we rethemed them. The Grasshopper ride also exists in De Panne, but with rabbits, and we gave it a nice big new station for this season. It’s a very reliable ride.

My favourite part of Maja Land is Maja’s Blütensplash; I think it is everybody’s favourite part. It is the optical highlight of the new area and when it goes round and round with its special song, it is great fun. After hearing it three times everyone knows that song, even the teenagers walk away singing it!

Maja the Bee, along with Wickie the Viking, was part of the catalogue of EM Entertainment in Munich, which Studio 100 bought in 2009 and rebranded as Studio 100 Media. Next year they will launch a computer-generated version of Maja on German TV, but still with all the same characters that everyone knows and loves. That’s the great thing about Maja the Bee, the parents know it, the grandparents know it, and the children know it.

The park forms part of the “360º” degree approach used for many years by Studio 100 in Belgium, where they put the characters on TV, do the merchandising and then use the parks to promote them, which supports the parks in return. Once they bought EM Entertainment, it was only logical they would want to some parks in Germany.

We have since introduced other Studio 100 characters and intellectual property into Holiday Park such as Tabaluga and the House Anubis, which is aimed at older children and teenagers. Last summer, after we had relaunched the Freefall Tower with Anubis, we held a small concert in the park with a meet and greet, and we had large queues of people wanting to get autographs of the actors. Now around 90% of our park merchandise features various characters, and people are spending more money on it. 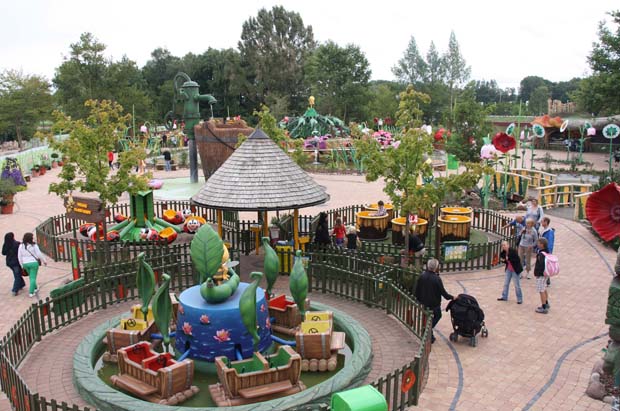 While we have tried to bring the park’s logo into the Plopsa style with the same font and image as the other parks, we have left the name as Holiday Park, with Plopsa as just a little addendum. Holiday Park is still very known in this area because of its long history; we have even left the sound of the radio commercials the same. We still have the Holly parrot mascot for the moment, but now he has all these new friends such as Maja, Wickie and Tabuluga.

We have noticed more guests coming to the park from the Benelux countries, but not because of the characters, as they use a different mix of characters at the parks in Belgium and the Netherlands. People are coming because the Plopsa season ticket is very good value and it is interesting now for them to have an extra park in Germany to visit.

I do not have the exact breakdown, but you can certainly see a lot more strollers around the park at weekends, we are getting a lot more children. However, over the years Holiday Park has built up a large following from teenagers, and we are not about to forget them.

Next season we will build a large themed restaurant within Maja Land, it will be a real eye-catcher. At around 400 sq m it will be about the same size as the Pfalzgraf, our biggest restaurant at the moment. The year after that we will change a lot of the park’s infrastructure and add also something for new for the teenagers; exactly what I cannot yet reveal.

The total investment through until 2014 will be €25 million. Last year I think we spent between two and three million, this year around nine million, next year we will have two again …you can figure out how much we have left for 2014. It’s great to be making all these investments because I think in the last few years park did not evolve, it did not develop.

Last season, with only the small investments, attendance went up over 25%. The weather has held us back a bit so far this year, but it will not stop us. The target is to reach 1.2 million visitors in the next five years. Then we will have the same attendance as Plopsaland in De Panne! 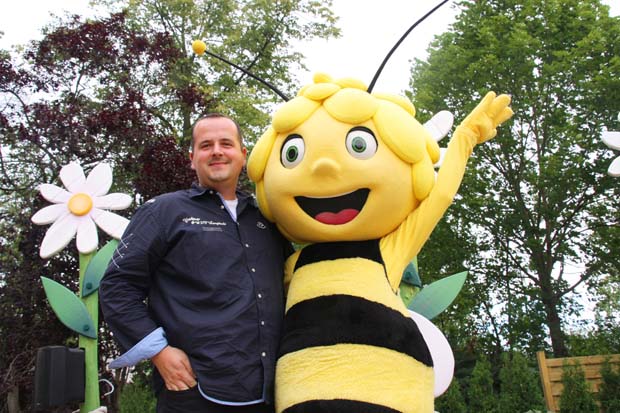 Bernd Beitz (pictured above with Maja the Bee) was talking to Owen Ralph. More photos of Maja Land here.

Plopsa is the theme park division of Studio 100, a Belgian-based producer of children’s television and entertainment whose productions – including Kabouter Plop, Maja the Bee, Wickie the Viking, Mega Mindy and Anubis – can be seen on channels across the Benelux, Germany and beyond. These licensed properties are brought to life inside the Belgian parks Plopsaland De Panne, Plopsa Coo and Plopsa Indoor Hasselt, the Dutch outlet Plopsa Indoor Coevorden and now Holiday Park in Germany. A season pass to all five Plopsa parks sells for just €79 (€69 online), and also allows half price entry to additional 50 parks and attractions within the three countries.

Located outside the small town of Hassloch in the southwestern state of Rheinland-Pflaz, Holiday Park started life in 1971 as one of Germany’s ubiquitous Märchenwald (fairytale forest) attractions. Its founder was circus proprietor Erich Schneider, who two years later would rename the venue Holiday Park. Early attractions included a wooden Wild Mouse coaster, motorboats, a monorail and dolphin show.

In 1979, the park opened what for many years was its signature attraction – the country’s first looping rollercoaster, Super Wirbel (Vekoma Corkscrew). Added during the 1980s were such features as an Intamin Rapids ride, the Burg Falkenstein dark ride, Anno Tobak boat ride and the first of the famous water stunt shows. Erich’s son, Wolfgang Schneider took over as manager of the park in 1986. New attractions followed throughout the ‘90s including a large Mack Log Flume (Teufelfässer), Dancing Pavilion (Gerstlauer Krinoline), Sturmschiff (Huss Pirate), Spinning Barrels (Huss Breakdance) and Freefall Tower (Intamin Giant Drop).

By the time Plopsa Parks/Studio 100 took over in November of 2010, Holiday Park enjoyed a reputation as one of Germany’s busiest amusement parks. Its history in now celebrated inside a new museum inside Fontänenplatz.