Six Flags Magic Mountain, Valencia. California, is to add three new coaster experiences in 2011, allowing it to reclaim the title “Coaster Capital of the World” from Cedar Point in Ohio.

With the new additions, Magic Mountain will boast 18 rollercoasters.The big news is Green Lantern (pictured above), America’s first ZacSpin vertical track spinning coaster by Intamin. Features a zig zag track pattern, riders sit in eight-person vehicles (four seats each side of the track), spinning and rocking back and forth as the cars descend through 825ft of twisted track, from a height of 107ft. Green Lantern will be located in a newly themed section of the park.

Magic Mountain’s popular Superman The Escape (also by Intamin) will fly again in spring 2011 as Superman: Escape from Krypton, reversing the direction of the vehicles. The L-shaped LSM launch ride, which will now blast riders backwards at 100mph, is also getting new cars as riders will hang face first with a birds-eye-view of the Santa Clarita Valley before plummeting back down to earth.

In addition, a Vekoma junior coaster that formerly operated as Road Runner Express at defunct Six Flags New Orleans will make its California debut.Cedar Point, it’s over to you… 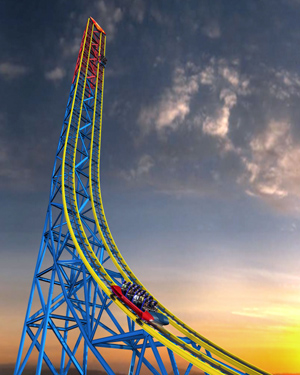