The world’s busiest theme park is about to get a little bigger. Work has begun on the largest expansion ever at the Magic Kingdom, Walt Disney World, Florida. The project will nearly double the size of the park’s Fantasyland are and provide a new home for Ariel, the Little Mermaid.

Scheduled to open in phases beginning late 2012, highlights of the new Fantasyland will include Under the Sea – Journey of the Little Mermaid (Pictured above), a major new attraction where guests will travel with Ariel and her friends above and below the waves. It is to be set against a musical backdrop of songs from the classic film. Also planned is the Castle of the Beast, standing upon a hill just across an old stone bridge from Ariel’s new home, plus new dining and retail opportunities.

Just outside the village will be Belle’s cottage and Enchanted Tales with Belle. The adventure begins in Maurice’s workshop, where a magical mirror is the doorway to the Beast’s library where guests meet Belle and Lumiere and share in a lively, interactive, re-telling of the “tale as old as time.”

The Magic Kingdom is also getting a new mine train attraction. The Seven Dwarfs Mine Train will take riders on an exhilarating ride into the mine “where a million diamonds shine.” The coaster will feature a first-of-its kind ride system with a train of ride vehicles that swing back and forth, responding to every twist and turn of the track. The journey will be accompanied by animated figures and music from the classic Disney film.

In the new Princess Fairytale Hall, on the site where Snow White’s Scary Adventures stands today, Cinderella, Aurora and other Disney princesses will greet guests in an elegant royal court (as pictured below). Featured here will be a brand new Storybook Circus carousel and not one but two Dumbo the Flying Elephant rides. Before taking to the skies on this Fantasyland favourite, guests can experience an array of fun-filled family games and interactive wonders. Meanwhile the Barnstormer family coaster gets a bright new look as well. 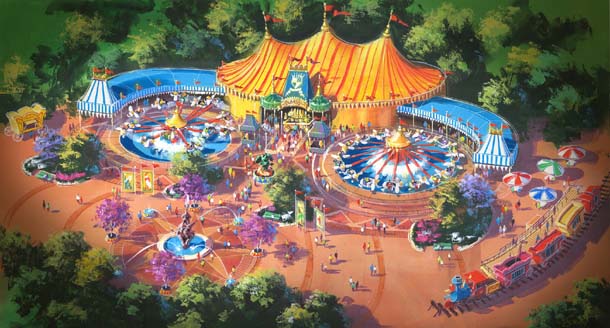