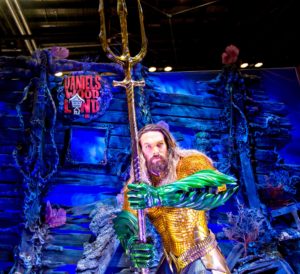 The Future King of the Seven Seas is making waves in Orlando. Madame Tussauds Orlando revealed its newest DC Super Hero wax figure at the recent IAAPA Attractions Expo. At the Daniels Wood Land booth, fans of the Aquaman got a first look at the worldwide debut of his larger-than-life Jason Momoa as Aquaman wax figure which is outfitted in the all-new costume created specifically for the Aquaman film that is set to debut in theatres on December 21.

Created in collaboration with Warner Bros. Consumer Products, Aquaman will take his rightful place alongside a cast of DC Super Heroes inside Justice League: A Call for Heroes inside Madame Tussauds Orlando and Madame Tussauds Sydney. Daniels Wood Land built and developed the sets for the Justice League: A Call for Heroes experience.