This spring, visitors to Lotte World in Seoul will find a new world to discover beneath the rest of the park.

Located in a space formerly occupied by the Lotte shopping mall, Underland promises to be a colourful new world home to characters from the popular Korean fairytale Ogre’s Magic Club.

It’s the latest themed area to be developed by the Goddard Group as part of a multi-project creative partnership with the Lotte Group. “For over a decade there’s been talk of turning the mall space into an additional theme park area, but with the spike in attendance over the last year, the idea was put on the front burner” reveals Goddard’s director of design, Taylor Jeffs.

“Up to this point, no other theme park in Korea has taken advantage of our country’s rich culture of myths and legends,” notes Lotte World manager of attraction development, Ashley Choi. “We see the launch of Underland as a big opportunity to build upon a popular story and characters already well ingrained within the public consciousness.”

From the initial idea through to completion, Underland will be realised in just 14 months. Featuring an interactive XD Theatre by Triotech, along with four new food and beverage locations, phase one will increase Lotte World’s total area by over 22,000 square feet. It will also introduce a significant number of new characters to Lotte World’s family of mascots, not to mention additional merchandising opportunities. 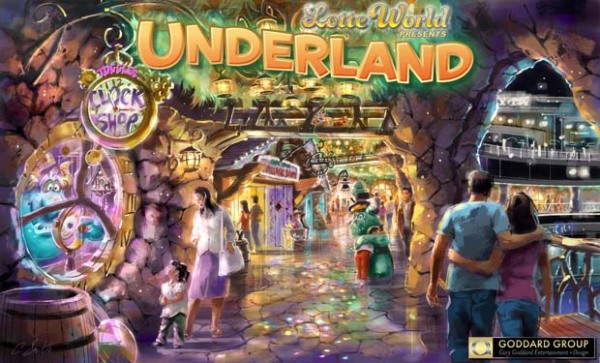