As London gears up for the Olympics, three new high altitude observation experiences await visitors to the British capital.

Located in the heart of Olympic Park, East London, the ArcelorMittal Orbit was designed by Anish Kapoor and Cecil Balmond and part-funded by the world’s largest steel producer.

Standing 114.5-metres-tall – almost twice the height of the adjacent Olympic Stadium – the Orbit is billed as, “the tallest sculpture in the UK.” Its twisting steel structure, coated in 19,000 litres of red paint, has been criticised by some as being ugly, while Kapoor has gone on record saying it doesn’t matter it looks like.

Tickets to access the Orbit’s two indoor viewing platforms cost £15 ($23.20/€18.90). On a clear day, the upper platform will offer views of up to 20 miles (32km). The tower has the potential to attract around 1 million visitors a year. 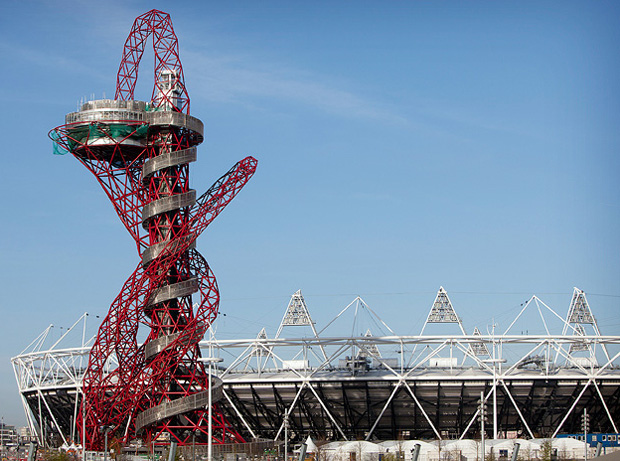 The ArcelorMittal Orbit towers over the Olympic Stadium

Roughly 5 miles (8km) away in Greenwich, visitors to The O2 concert venue (formerly the Millennium Dome) can now enjoy a breathtaking climb across the roof of this famous tented building.

The Up at The O2 experience begins at the Base Camp briefing area before guests are kitted out in climbing suits, shoes and safety harnesses ready to make their way to the base of the tent to start their climb. From here, climbers are guided in groups of 30 to a central observation platform via a 190m-long fabric walkway suspended between The O2’s distinctive yellow masts.

At 52m above ground level, guests can enjoy spectacular views of London and its many landmarks, including the Olympic Park, Thames Barrier and the Shard and Canary Wharf skyscrapers. Participants must be at least 10-years-old, 1.2m-tall and medically and physically fit. Tours for people with disabilities, including wheelchair users, are planned at a later date. Adult tickets cost £22, and advance booking is recommended. 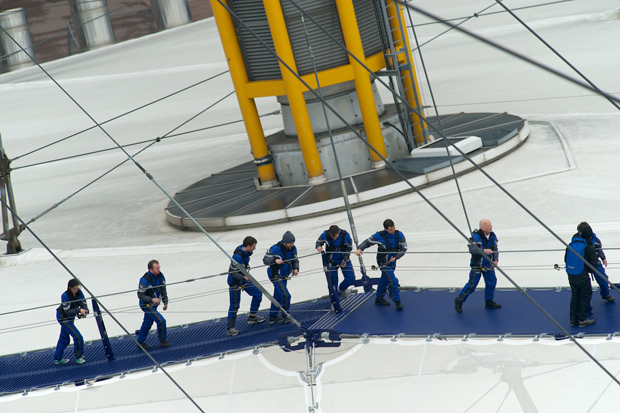 London residents and visitors can enjoy views of The O2 from even higher up onboard the Emirates Air Line, the UK’s first urban cable car system – as seen at the top of the page. Sponsored by the Dubai-based airline, this high altitude form of transport links Greenwich Peninsula and The O2 with the Royal Docks (serving the ExCel exhibition centre).

Allowing pedestrians, wheelchair users and cyclists to cross this section of the River Thames within five minutes, the journey previously involved transit by a combination of London Underground/Dockland Light Railway. The structure has a cable span of just over 1.1km and is supported by three towers. At its highest point, passengers will be 90m above the Thames.

Though designed primarily as public transport and as a means of encouraging local regeneration, the Emirates Air Line also has obvious tourist potential. Outside peak times, the cable car will operate at reduced speed to allow passengers to take in the views. Adult fares are £4.30 one-way, or £3.20 for Oyster card users. 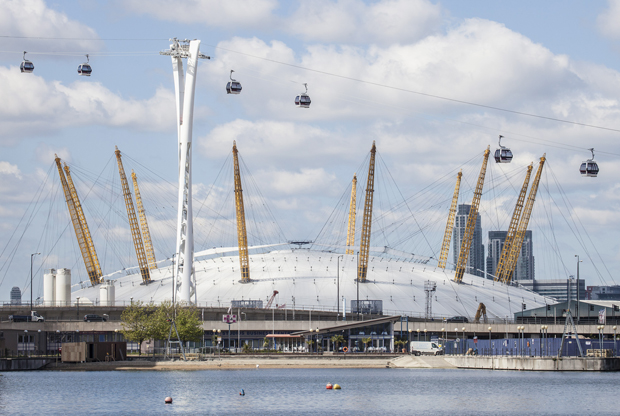 Meanwhile on Sunday July 15, a troupe of ‘extreme action’ dancers staged a one-off performance called the Human Eye on the capital’s famous observation wheel, the EDF Energy London Eye. The spectacle was part of a city-wide series of ‘Surprises’ co-ordinated by the American choreographer Elizabeth Streb.

A total of 32 dancers entered the 132-metre-tall construction, positioning themselves on alternate 50-metre spokes. As the wheel turned, each performer contended with an ever-changing pull of gravity; rising up and sliding down with each rotation. The effect was to create an ever-changing spiral.

The wheel spun at a faster rate than normal operations, with each full rotation made in just twenty minutes. In total the Human Eye was performed three times, creating an hour-long show as the sun set over the Olympic city. Other London landmarks used as part of Streb’s ‘guerilla’ performances included City Hall, Millennium Bridge and the National Gallery. 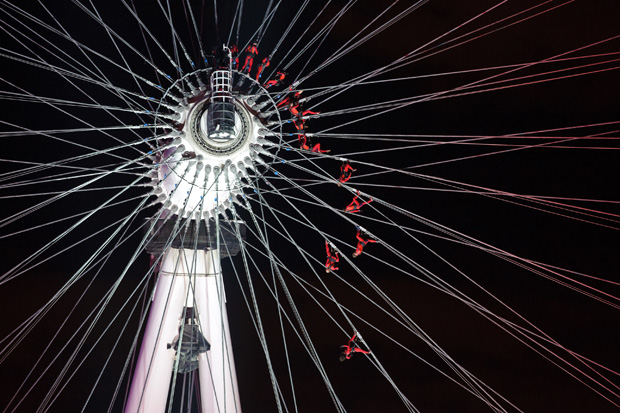 Human Eye on the London Eye