The lyrics went, “…and down and down I go, round and round I go, like a leaf that’s caught in the tide…”

At Zorb Smoky Mountains in Pigeon Forge, Tennessee, I felt less like a leaf in the tide and more like a hamster in a ball. Located just down the road from Dollywood, it’s the only official Zorb site in America, although similar attractions are offered in other countries. I was inside a 12-feet diameter (3.7m) translucent Zorb globe, sloshing around in my bathing suit as I rolled down a hill.

Zorb is a New Zealand company that manufactures the unique globe-riding devices, and also operates them for paying guests at its site in Rotorua. In fact, the crazy kiwis have been Zorbing for over 15 years.

I found it interesting that Zorbs have been adopted as a symbol of the 2014 Winter Olympics in Sochi, Russia. According to Dmitry Chernyshenko, president of the Sochi 2014 organising committee, “The transparency of Zorbs also reflect the open, accessible and inclusive society that Sochi 2014 Games is helping to build.”

Once inside one of the globes at a Zorb site, you roll down the hill, wet or dry, whichever you choose. There are two types of Zorbs available – the harness, or Zorbit (dry) variety; and the non-harness, or Zydro (wet) variety. Obviously, I chose the Zydro. I could have chosen the Zorbit, in which you roll over again and again, but I’m not a complete idiot. At least not yet 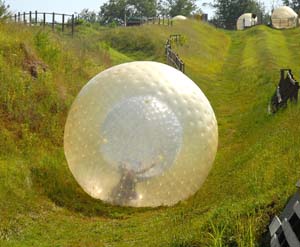 I’ve been fascinated by hamster balls for years. The only difference between me and a hamster riding inside is that the hamster rolled on a flat surface. Me? I like to go with gravity. Coasters? Yes. Bungee towers? Yes. Zorbs? Why not?

The ride was a little bumpy, but the Zorb is double-sectioned, with one ball inside the other and a layer of air inbetween. This acts as a shock absorber for the rider, damping bumps during travel. Zorbs are lightweight and made of flexible plastic, as opposed to the rigid plastic of a hamster ball. It was comfortable, but disorienting. I mostly rolled backwards, but because of the water inside I slid, never inverting.

Would I do it again? In a heartbeat, singing to myself all the way. “…Darling, down and down I go, round and round I go. In a spin, loving the spin I’m in, under that old black magic called Zorb.”