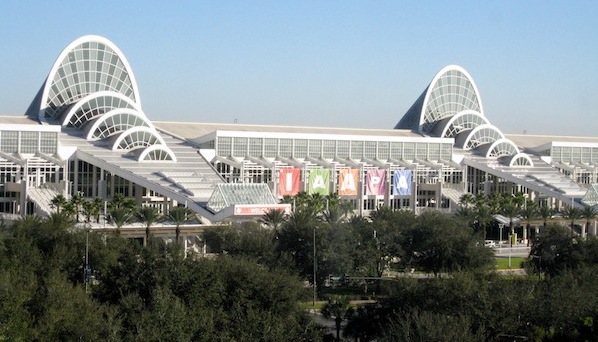 Have you taken a full look yet at the timetable of events taking place this November at IAAPA Attractions Expo in Orlando? Park World has. Here’s our pick of the programme.

Still the world’s biggest trade show and conference for the theme park and attractions industry, IAAPA is using “Big” as the theme for the week’s activities, which kick off on Sunday 16 November, though the trade show itself doesn’t open until Tuesday. Attendees from all over the world will test, try, and buy the industry’s newest innovations from more than 1,000 exhibiting companies and sit in on more than 100 educational opportuities. There will also be multiple networking opportunities, and of course the chance to visit the many world-class theme parks, waterparks and other family attractions that are located within minutes of the host venue, the Orange County Convention Center.

IAAPA will host several charity events throughout the week to benefit Give Kids The World. The 12th Annual IAAPA International Charity Golf Tournament will be held Sunday 16 November at Orlando’s Hawk’s Landing Golf Club. The 5th Annual Motorcycle Run takes place the same day, starting out from Harley-Davidson Orlando. The Charity 5K Run and 1 K Walk, rebranded Footprints from the Heart, will be staged Thursday morning, 20 November, this year at Give Kids The World (GKTW) Village in Kissimmee.

Following a similar format to the Thursday night events staged at Attractions Expo, IAAPA had added a new Monday night fixture at Disney’s Magic Kingdom. “Big Starts Here” invites attendees to a fantasy-filled evening at Disney’s flagship Florida park, including exclusive access to New Fantasyland, plus food and adult beverages. Tickets cost $104/149 (IAAPA members/non-members) to both this and Thursday’s “IAAPA Connects” event at Universal Orlando, which will include full access to The Wizarding World of Harry Potter including Hogsmeade and the new Diagon Alley expansion. A limited number of combo tickets covering both the Monday and Thursday events are available for $175.

Get to the convention centre ahead of the show on Tuesday morning (8.15am) and you can check out The Kickoff Event, an action-packed presentation of news, entertainment and industry reports from every corner of the globe, as well as a sneak preview of what lies ahead in 2015. During the event we will also learn of the latest IAAPA Hall of Fame honourees, the 2014 Applause Award winner and witness the Changing of the Gavel ceremony to welcome Gerardo Arteaga of Fantasilandia in Chile as IAAPA’s new chairman, taking over from Mario Mamon. Then, on Tuesday evening straight after the show, the Opening Reception will take place in the same IAAPA Theater on the show floor (tickets $35/$45).

Further networking opportunities will come on Wednesday evening with dedicated receptions for European members, Carnival and Showmen, Latin America, Waterpark and FEC representatives. On Thursday morning there is both an Asia-Pacific and Canadian Breakfast. Look out too for parties staged during the week in and around International Drive courtesy of various exhibitors.

Fancy an early start on Wednesday morning? Then get yourself a ticket for Disney at Dawn: The Retail Experience – starting at 6.15am – including a behind-the-scenes visit to three exit gift stores and a standalone retail operation in the park, plus a buffet breakfast and a Q&A session with Disney managers. Additional tours to local attractions will be offered including a Hard Hat Tour to the Orlando Eye and I-Drive 360 (Wednesday afternoon) and a Facility Tour to Aquatica (Thursday morning).

Don’t just go looking for new ideas on the show floor at IAAPA Attractions Expo in Orlando. During the week there are over 100 educational opportunities where you can learn from some of the industry’s best. The family entertainment centre-focused IAAPA Institute for Rookies and Newcomers takes place on Sunday 16 and Monday 17 November, while the IAAPA Institute for Attractions Managers runs from Sunday to Tuesday.

On Monday afternoon there’s a chance to hear how one small(ish) attraction in Florida become “the best FEC in the world” as John Arie shares the Fun Spot story during Lunch & Learn. Wednesday morning’s GM and Owners’ Breakfast will this year feature a keynote from Ripley Entertainment president Jim Pattison Jnr.

All of the above require paid, pre-registation, however many other seminars are available during the event as part of the price of an Expo badge. The panel for the CEO Speaks session on Tuesday afternoon had yet to be confirmed at the time of writing, but it’s usually an insightful way to spend 75 minutes. For Disney fans, the Legends Session (Wednesday at 3.30pm) is always a must-attend fixture. This year’s almost three-hour epic focuses on the influential 1964-65 New York World’s Fair and includes contributions from Alice Davis, Bob Gurr, Marty Sklar, Richard Sherman and moderator Bob Rogers. Further industry widsom is likely to be imparted during TEA Presents Future Legends – Transforming Experience from 9 to 10.15am on Thursday, where speakers will be Christian Lachel of BRC Imagination Arts, JRA’s Clara Rice, John Paul Gerts from Nickelodeon and Steve Trowbridge, principal of Retroactive Inc.

There will probably be a little bit of salesmanship to Thursday morning’s Rocky Mountain Coaster Story: Fast Track to Success but it should nevertheless by an interesting session from company president Fred Grubb and famed coaster engineer Alan Schilke. Additional contributions will be provided Paul Norton of Silverwood Theme Park in Idaho. Finally, at 5pm on Thursday (there are no edication sessions on Friday) there’s a chance to hear emerging industry leaders from Harbour Park (UK), Resorts World Sentosa (Singapore), Monterey Bay Aquarium (Canada) and also IAAPA share their views during the Young Professionals Roundtable.

Whatever else you’re interested in, whether it be safety, government relations, marketing, social media, merchandising, ticketing, cash control or something else, there is probably also a session for you, so check out the full schedule on the official IAAPA Attractions Expo website as below.

IAAPA Attractions Expo 2014 takes place from 17 to 21 November at the Orange County Convention Center in Orlando, Florida. For more information, full session times, or to register for the show or the many social events, facility tours etc (be warned, they can sell out in advance), see iaapa.org/expos/iaapa-attractions-expo

How’s THIS for a Ghost Train?