To celebrate the Diamond Jubilee of Queen Elizabeth II, Legoland Windsor has introduced a 10cm-high Lego model of the monarch, complete with a crown encrusted with real diamonds.

Commissioned by award winning jewellery designer Dinny Hall, the tiny 1.5cm tall crown is made from silver, coated with precious rhodium and festooned with thousands of pounds worth of brilliant cut diamonds. According to the park, a security guard has been hired in to keep a watchful eye on the model during opening hours. Overnight it will be locked away.

“We decided to make a new Miniland figure of Her Majesty for the Jubilee celebrations but wanted to do something extra special for such a momentous occasion,” explains Legoland Windsor divisional director, Sue Kemp. “As it’s her Diamond Jubilee the idea of giving our Lego Queen a real diamond crown seemed very fitting and our talented model makers worked closely with Dinny Hall to create what must be one of the most unique – and smallest – crowns in the world; and one of the most valuable Lego models!”

Dinny Hall has created jewellery for famous customers including Kate Winslet and the British Prime Minister’s wife Samantha Cameron. Based just outside London, Legoland Windsor is operated by Merlin Entertainments. 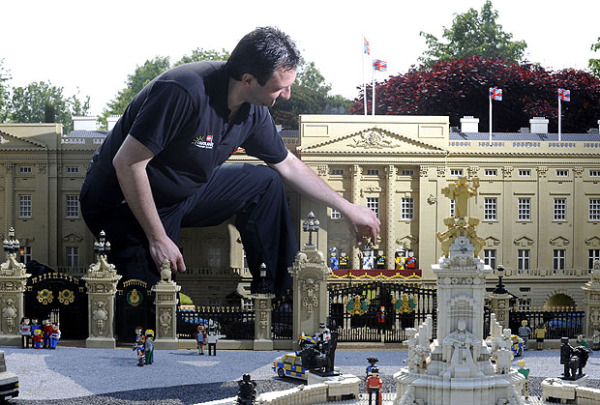