As these pictures show, construction is well on track at Asia’s first Legoland Water Park.

Set to open on 21 October as a second gate to Legoland Malaysia, it will elevate the destination to “resort” status. Aimed, like is sister park, at families with children aged two to 12, the waterpark will feature more than 20 slides and attractions. WhiteWater is believed to be the main supplier.

Its arrival in Nusajaya, Johor – close to the border with Singapore – comes 13 months after the opening of Legoland Malaysia, which has already proved a big hit for operator Merlin Entertainments and its local partner Themed Attractions & Resorts. A themed Legoland Hotel is taking shape close to the park entrance and will open early 2014.

Malaysia’s Legoland Water Park will be the third and largest Lego-themed waterpark to open worldwide, following those at Legoland California and Florida in the USA. Some of the highlights promised include the Build-A-Raft River and Joker Soaker, a interactive platform and wade pool where children can play with water cannons as a Lego jester model tells jokes while 350 gallons of water pour down upon them. The much facility will also feature two restaurants, private cabanas for rent and a retail store.

“The Water Park will add a whole new dimension to the Legoland Malaysia experience,” says general manager Siegfried Boerst, adding that the new facility will encourage families to make more visits and stay longer. “In total, Legoland Malaysia Resort will have more than 70 rides, slides, shows and attractions. This is a unique holiday destination for the entire family to enjoy.” 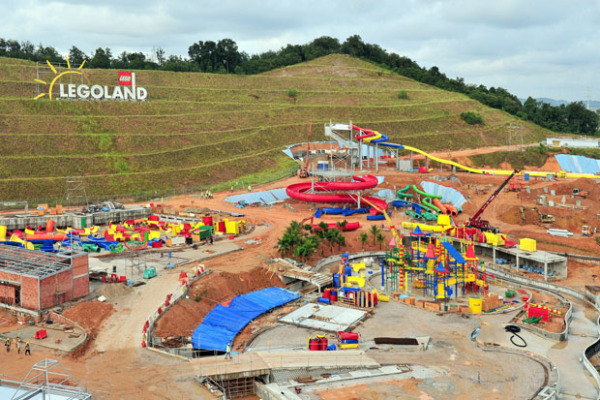 Starting this August, limited numbers of Premium Annual Passes will go on sale, allowing unlimited access to both theme park and waterpark for during normal operating hours for RM395 ($124/€95).

In The Loop – a brief history of upside-down coasters