This, the fourth Legoland Discovery Centre (LDC) worldwide, was built at a cost of around £7.5 million ($11.2m/€8.3m) at the Trafford Centre, a shopping mall and leisure destination that already attracts over 35 million annual visits.

Merlin deal with mall’s owners, The Peel Group, was signed in early 2009, and construction began in September, in anticipation of a March 22 opening. The 3,500 square metre facility boasts capacity for 600 visitors at a time and the target is for up to 300,000 annual guests, in line with other Legoland Discovery Centres. Early indications are good. An intense inauguration period witnessed full bookings for the first week, with strong demand anticipated over the Easter holidays that followed.

After debuting the LDC concept at Potsdamer Platz in Berlin during 2007, followed by subsequent openings in Duisburg, Germany, and Schaumburg near Chicago (both in 2008), Merlin has refined the model with its arrival in Manchester.

“When we did Berlin, we were targeting a mix of tourists and local residents,” explains Glenn Earlam, Merlin Entertainments’ managing director of “Midway” attractions – those intended as a two to three hour visit. “What we have since realised is that the audience is more local, a one to two-hour drive time.”

Earlam adds, “it is no accident that LDC three and four – Chicago and Manchester – are both in big shopping malls. They benefit from things like great access and free parking, very important if your market is mostly young kids. Other new openings are likely to be in similar developments within reasonably affluent and highly populous suburbs.”

Located in the north west of England, Manchester is one of the country’s largest cities after London and Birmingham. It boasts a population of around half a million, but as many as 14 million are located within a two-hour drive of the Trafford Centre, linked directly to the M60 motorway.

Other leisure offerings inside the mall include a Namco Station arcade, Paradise Island adventure golf, Laser Quest and Odeon cinema. Across the road there is Chill Factore, a large indoor snow centre along the lines of Ski Dubai, and at the time of writing Cirque du Soleil was in town with one of its touring shows. 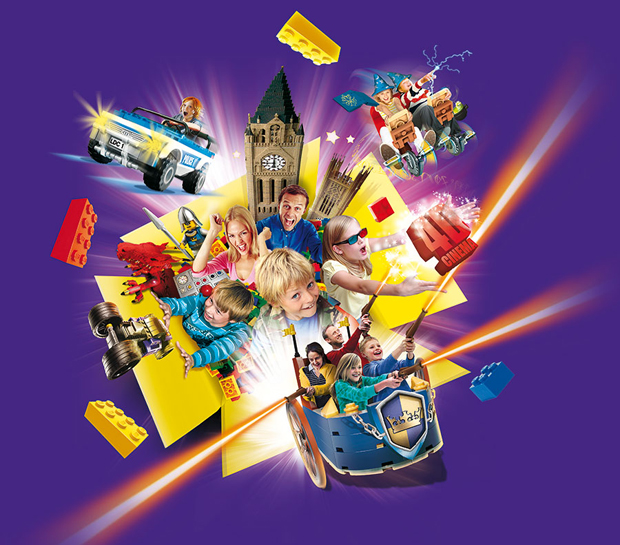 LDC is the first attraction within Barton Square, a mall extension opened in 2008. Dedicated largely to homeware stores, it simply doesn’t enjoy the same footfall as the rest of The Trafford Centre – yet. This is where Merlin has a role to play.

“Hopefully we can act as a leisure anchor in this part of the centre,” says Earlam. “I think operators such as Peel appreciate what we can bring, and this helps us negotiate good rates. They have been great to work with.”

Indeed, Merlin has been given the entire first floor in a corner of the mall that was previously struggling to find tenants. Peel has also co-operated by offering LDC additional marketing support, signage and things such an information booth on the other side of the footbridge that links Barton Square to the rest of the mall.

“That proved very useful during the first week when we were sold out,” notes marketing manager Rachael Lockitt. “People walk up to the booth, ask ‘Have you got tickets today?’ and we can advise them before they make that walk over the bridge. We can also use it tactically, so perhaps during the week when there is spare capacity we can do an offer to encourage people over. It’s a great source of information; for the guests, and for us.”

Lockitt is the former PR manager of Alton Towers, and one of a handful staff recruited from the park to become part of the LDC launch team in Manchester, along with general manager Neil Crittenden and finance manager David Brown. Several other key staff come from nearby Merlin attractions too, including operations manager Anja Hodapp, ex-Sea Life Blackpool. In total there are around 50 employees, including 35 full time staff.

At present, the attraction is open from 10am until 7pm daily, with the last admission at 5pm. That means it will be down to school groups, as well as birthday parties, to provide a large chunk of the business midweek. Lockitt says they may extend opening times in line with the rest of the Trafford Centre, which stays open until 10pm during the week, if demand is there.

When guests arrive, they enter via a large Lego store at ground level, and then head upstairs to enjoy the rest of what LDC has to offer. The proposition is that they are stepping into the “world’s biggest box of Lego,” featuring over 2 million bricks. The tour begins with a visit to the Lego “Factory,” followed by the interactive dark ride Kingdom Quest and then Miniland, the model exhibit central to every Legoland outlet. From here on families are free to explore LDC at their leisure.

This system of staggered arrival, which begins with a pre-show holding area, contrasts with earlier LDC outlets such as Berlin, where all attractions are clustered around a central hub, and guests allowed to plot their own course. “The danger with that,” says Lockitt, “is that everyone rushes straight off to do the ride or 4D cinema. It’s not to say you can’t go back, but doing it this way provides us with an element of control.” 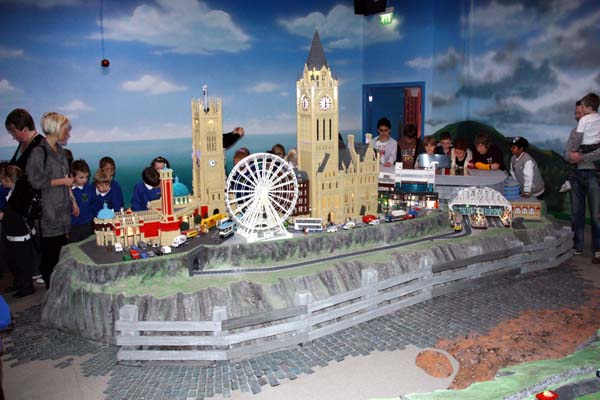 Based around Lego’s medieval product range, Kingdom Quest is already one of the centre’s most popular attractions, and was chosen instead of the family coasters at other LDC outlets because of its interactivity.

“One of the key things for the brand is repeatability, and that was one of the reasons for selecting the dark ride,” confirms Earlam. “It’s perfect for the Midway concept. There’s nothing better for our guests than having their own personal score, which they can come back and beat another time.”

The attraction is the first interactive dark ride to be realised by 3DBA and partners including Alterface. Passengers board themed trackless ride vehicles by ETF, and take a three-minute journey to free a medieval princess. The ride features six scenes, four using computer-generated screen animation, and two with live props and animatronics.

Lego Studios is the name of the LDC’s 4D cinema, a 108-seat installation by Wiegand (Entertainment Resource) showing the films Spellbreaker and Bob the Builder 4D. Fire Academy, meanwhile, is a giant play structure commissioned from Play Revolution, and another popular feature with young guests.

The cafe provides a great spot for parents to sit while their children play nearby, and many will be heartened to see a relatively healthy menu on offer.

“We have had one or two people asking why there are no chips,” says Lockitt, “but really it doesn’t make sense when there are so many other food & beverage opportunities at the Trafford Centre itself.”

According to Lockitt, recruiting the model builder was one of the most effective pieces of PR in the run up to the centre’s opening. “We got great coverage,” she says. “Here was a job that involved playing with Lego all day, and it really caught people’s imagination. It also helped us communicate a bit more about the content of the attraction.”

To date, each Legoland Discovery Centre is located in a country where there is already a full size Legoland park. This helps with brand recognition, but also presents a marketing challenge.

“We didn’t want people to think this was a ‘Legoland of the north’,” explains Lockitt (Legoland Windsor is in the south east). “That meant looking at everything, starting with the logo, which is a different colour, through to our visuals, where we focus much more on Lego bricks than any rides or attractions. In Berlin they focused on the ride, and that made people think it was a theme park.”

There will, however, be scope for another ride in Manchester when, rather than if, LDC is expanded. So far only about half the available upstairs floor space has been used. Clearly it’s too early to know what exactly what might be added, but Earlam says he’s a big fan of the interactive Technicycle at LDC in Chicago, and wouldn’t mind expanding the play area too.

It appears Legoland Discovery Centres will eventually outnumber Legoland parks in quantity. The next LDC, for example, will open spring 2011 at the Grapevine Mills shopping mall near Dallas, Texas, and there are plans for a third American outlet at the Xanada complex in New Jersey. More UK openings are a possibility too. “We’re looking at all sorts of sites worldwide,” confirms Earlam.

More photos in the April 2010 issue of Park World.

However, the centre is aggressively pushing an LDC Unlimited Pass, at £27.50 for children or £75.00 for a family of four. Valid for a year, the family pass includes one free visit for each family member to Legoland Windsor (normally £38/28). Merlin hopes that pass holders will eventually account for between 20% and 30% of all LDC visits in Manchester.

But is there not a danger of pass holders preventing walk up sales? “We could offer passes with blackout dates,” says Merlin Entertainments’ managing director of Midway attractions, Glenn Earlam. “So far we haven’t had to do that. We find that pass holders are among the most sophisticated of users and are quite good at working out when is best to come. That’s good for us because it helps balance out peak and off peak attendance.” 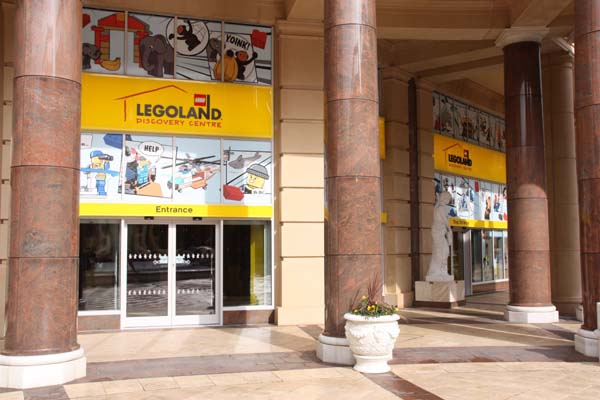 Legoland Discovery Centre is not the first family attraction to appear at the Trafford Centre, or indeed the first to feature an interactive dark ride. In 2002, childrens author Miranda Rijks opened an attraction called The Adventures of Dreamieland.

Comprising a dark ride and gift shop, it closed after just a few years’ operation. Located on an upper level of the mall away from the shops, it suffered from poor visibility, but perhaps the reason it failed and Legoland Discovery Centre looks more likely to succeed is the power of the brand.

Rijks had plans to develop spin off TV shows and other franchises featuring the Dreamieland characters, but was essentially creating a brand from scratch. With Lego’s universal recognition and Merlin’s “Midway” attraction knowhow, Legoland Discovery Centre has a much bigger headstart.