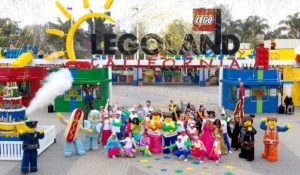 In honour of the special birthday, Legoland California handed out free child-size Minifigure hands to the first 1,000 kids entering the Park. The Lego birthday cake, created out of more than 100,000 Lego bricks, was also be on display showcasing the many attractions that have been added to the family theme park since it opened 20 years ago including a Lego submarine, representing the Park’s newest ride, Lego City Deep Sea Adventure submarine ride.

The birthday kicked off a year-long celebration that includes a new interactive Birthday Dance Party, Lego Friends birthday show, exclusive birthday desserts, pop badges, and more. The new shows can be seen daily through September 1 and are filled with singing, dancing and characters for all families to enjoy. Plus, Legoland California is paying the birthday fun forward to its younger guests – all children ages 12 and under get free admission on their birthday all year long!