Bavaria’s first launch coaster will open for the start of the 2011 season at Bayern Park in Reisbach.

Described as “a coaster of epic proportions,” Freischütz (Freeshooter) is currently under construction at the Munich factory of Maurer Söhne.

The ride boasts several bragging rights, including the most coaster inversions for Germany and most inversions for any catapult coaster worldwide. It will also be the first to feature a “flying launch,” where braking energy will be recovered and reused for the next thrust start.

Freischütz will be notable, too, for its layout. The 480-metre-long ride is being seamlessly integrated into the steep hillside terrain around Bayern Park, with highest point of 24 metres above ground on the hillside actually being 35 metres from the foot of the hill. Numerous crossovers, intersections and overlaps will provide a compelling sight for spectators.

Freischütz will use Maurer’s X-Car ride vehicles, meaning passengers can be seated without over-the-shoulder restraints. Using two trains, each with two cars, theoretical hourly capacity for the ride is 600. Maximum speed will be 80km/h.

*Following the temporary closure of Hollywood Ripe Ride Rockit at Universal Studios in Orlando, manufacturer Maurer Söhne has confirmed that all other X-Car coasters are fully operational. The issue in Orlando is believed to be due to a unique set of circumstances related to the car’s coupling. 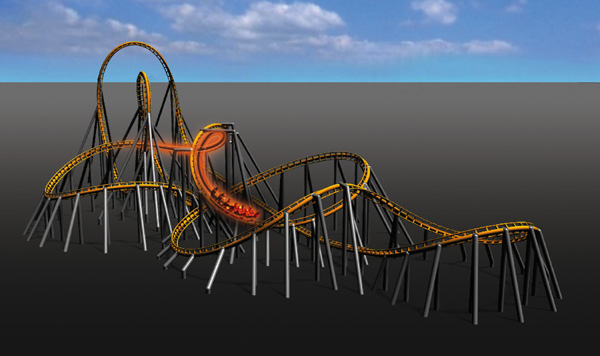