This is a story of perseverance. Of stick-to-itiveness. Dick Knoebel is a Marine, and Marines never give up. Paul Ruben celebrates the Pennsylvania park owner’s achievement in finally opening the Flying Turns.

A wooden bobsled coaster, the Flying Turns was built at Knoebels Amusement Resort in Elysburg in 2007. Since then, the million dollar question around Knoebels was, “When is the Flying Turns going to open?” The answer from Dick Knoebel, park president and co-manager, was always the same, “When it is done.” Now the long wait for thrill-seekers in central Pennsylvania is finally over. Knoebels’ Flying Turns had a soft opening in October after seven long years of construction and testing, and will open full time next year. 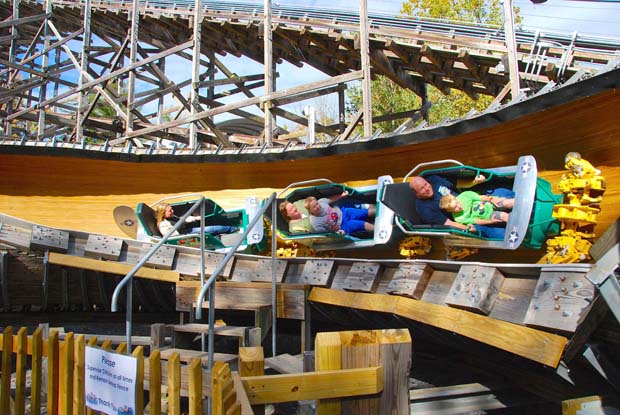 “This is the only one in the world like it,” highlights Knoebel. “Nobody else has one; we’re so proud of it. We invite everyone to come and experience the thrill of the Flying Turns.”

The ride is thrilling, fast, very smooth, and beautiful, like a piece of fine wood furniture. Guests are seated in a train consisting of three two-person cars that travel through a 1,300ft-long (396m) polished wooden trough. There are three lift hills to keep the vehicles safely spaced. The chains are lubricated with water to protect the wood from oil spills. 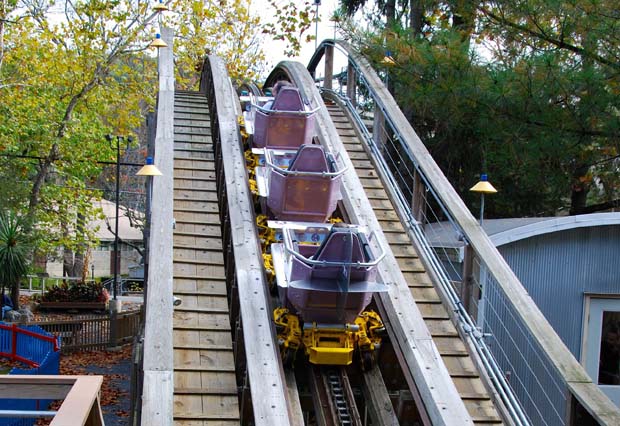 Once the riders are seated and belted in, the train is pulled up a 48ft-high (14.6m) hill. Passengers then shoot through a double helix to build up speed. After a few more twists and another lift, the real thrill comes when it leaves its tracks to manoeuvre through two 270º turns at speeds reaching 24mph (39km/h), travelling through of a narrow trough guided by centrifugal force, much like a bobsled. From start to finish, the ride takes just over two minutes.

The cost of the ride? Knoebel smiles and will only admit, “it was plenty.”

The concept of the Flying Turns is more than 80 years old. The first of its kind was built in 1929 at Lakeside Park in Dayton, Ohio. The last one closed in the early 1970s. Both Mack and Intamin have since introduced steel-trough bobsleds, but the ride experience is not the same. The challenge to re-create the original wooden ride for the 21st Century was to meet today’s more stringent safety standards. Knoebels has succeeded, but it wasn’t easy.

“We were casting about for a new and different attraction,” recalls Knoebel, and John Fetterman [designer of the park’s Twister coaster] suggested a re-creation of the famous Flying Turns. “After some presentations and discussions, we decided to proceed. It would definitely be different as all of the original Flying Turns were gone by 1975. It is distinctly different, a rollercoaster without a track, similar to a bobsled ride.” 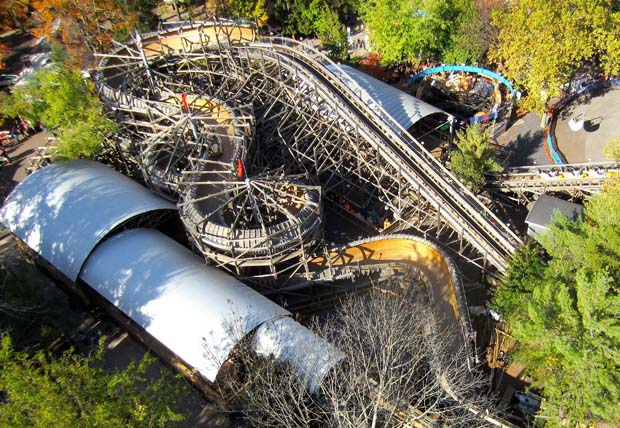 Normally a major new ride would open at the beginning of the season, not the end. But Knoebels is not your normal park. “We were anxious to get it completed,” explains Knoebel, “and having it open for our annual Phoenix Phall Phunfest in October would be a stellar achievement. We can still bill it as a ‘new’ ride for 2014. The remaining weekends in October would be perfect for further training and development.”

Reception to the Flying Turns has been effusive. “People of all ages, above 42 inches [1.1m] and able to safely sit in the confined space will most definitely enjoy the ride. Even those who remember the Euclid Beach and Riverview rides say it is better.” 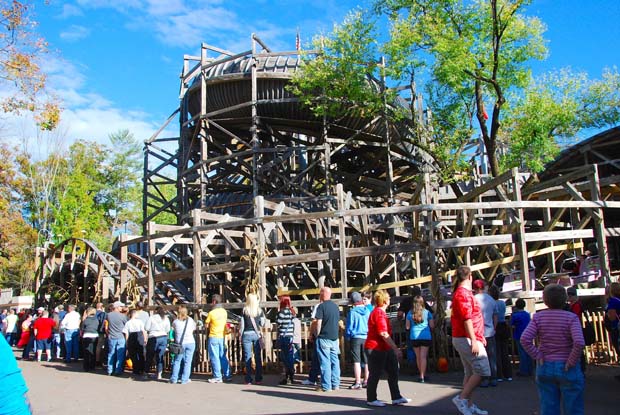 Waiting time to ride during the October weekends often exceeded two hours, in part because the ride capacity is a modest 200 per hour. But people waited patiently, expectantly, and weren’t disappointed.

Knoebel himself has ridden it, of course, and offers a connoisseur’s perspective. “Perhaps the best part of the ride is the last 100 yards [91m] before entering the brake run. That is where the train has the most speed and climbs the chute walls to the highest point.” 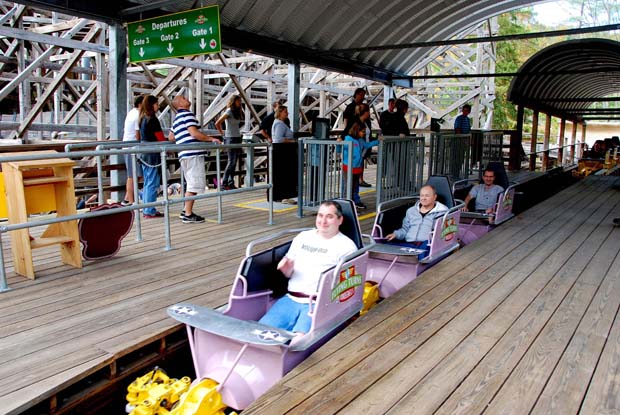 Now that it is open, Knoebel anticipates “that the addition of the Flying Turns will add to our attendance, although not a huge amount, but will give our ride line-up a wider appeal.”

The seven-year path to completion of the Flying Turns was as twisted as the ride itself. Knoebels tried to duplicate the earlier rides as much as possible, but the first version didn’t work right. It didn’t track consistently, and there was concern the trains might jack-knife. The second generation train took into account ASTM standards, but was still the original train design from the 1930s – hinged, or articulated, in the middle. Unfortunately the weight of the train was determined to be too heavy for the structure. This was all good information that was subsequently incorporated into the third generation train. The chassis was redesigned to be lighter, using aluminium. The design went from three axles to two, which removed a hump in the middle of the car. The single casters that were at either end of each axle were then replaced with two casters on each corner of the two-axle train. This finally worked. 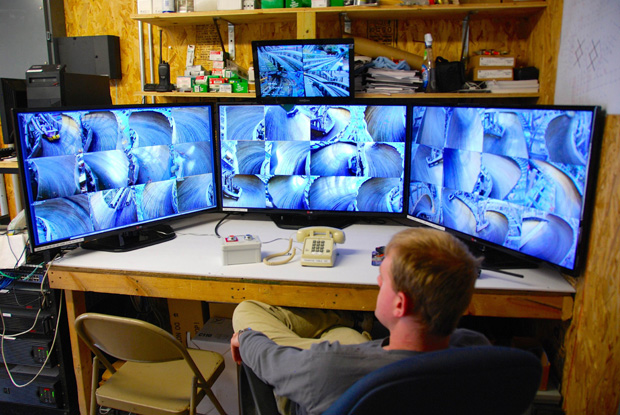 “The engineering challenges were daunting,” recalls Knoebel. “If we could have constructed the vehicles as a copy of the Euclid Beach vehicles (we had one on hand to study), we would have been home free. But the rules have changed; we had to start from scratch. Then it was a matter of designing and building the passenger compartment. We had darn near reached the futile end of the project when we lured Mike Boodley [coaster designer, ex-Great Coasters International] into the project. He, too, almost gave up but we kept pursuing until we found the solution and Mike gets the credit for succeeding.”

Knoebels Amusement Resort is a family owned and operated amusement park, picnic grove and campground. It is and has been America’s largest free admission park for its 87 years of operation, boasting 77 rides and attractions, 21 food outlets, 26 games and arcades, and 20 gift shops. But the Flying Turns is the icing on the cake. 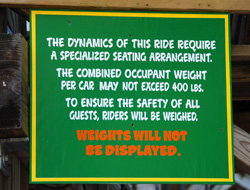 A brief history of the Flying Turns

John Norman Bartlett, a British aviator in World War I, came to North America after the war with an idea for a rollercoaster using a trackless wooden chute, full of twists like a bobsled course, with toboggan-like cars. He called it the Flying Turns, and filed a patent for the idea in 1926. In 1928 he and coaster builder John Miller began building the new ride. The prototype opened in 1929 at Lakeside Park, Dayton, Ohio. When the ride went into production, much of the idea was the same, designed by Bartlett, looked more like monoplanes. Miller worked on the loading station, supporting structure, braking system and incline. 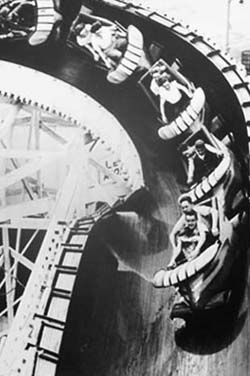 After the appearance of the Flying Turns at Lakeside, a second opened in 1930 at Euclid Beach Park, Cleveland, Ohio. Rocky Point Amusement Park, Warwick, Rhode Island, installed the third in 1931, followed by the ride that opened in 1933 at the Chicago World’s Fair, before being moved to Chicago’s Riverside Park in 1935 (as pictured below) after the fair closed. The same year also saw the appearance of a ride at Fyns Tivoli, Odense, Denmark. It was moved and rebuilt more than any other Flying Turns, appearing at the Brussels International Exposition in 1935, Berlin Olympics in 1936, Bakken near Copenhagen in the late 1930s, and finally back to Fyns Tivoli in 1951. Both Forest Park Highlands in St Louis and Steeplechase Park at New York’s Coney Island added such a ride in 1934. New Jersey’s Palisades Park added a new version called the Lake Placid Bobsleds in 1937. Bartlett’s last Flying Turns was built for the 1939 New York World’s Fair, and then moved to Coney Island when the event closed in 1940. All of Bartlett’s Flying Turns were gone by the early 1970s.

Beginning in 2006, the concept was resurrected and built from scratch by staff at Knoebels Amusement Resort in Pennsylvania. It was designed by John Fetterman from an original Miller and Bartlett design, and finally opened after seven long years on 4 October, 2013. We hope our pictures elsewhere on this page do it justice.