The first Multi Motion Tower from ABC Rides debuted in July at Taunus Wunderland in Germany.

Riders on the freefall attraction face a series of surprises as the tower tilts forwards and from side to side during the ride.
Knall & Fall (Bang & Fall) is the first tower ride from ABC Rides to feature a forward tilting motion, at up to 10°. Like the Swiss manufacturer’s Tilt Tower it also rocks from side to side at the same angle.

The ride supplied to Taunus Wunderland features an eight-seater gondola and stands 17-metres tall, occupying a 6.5 x 8.5 metre footprint. Theoretical hourly capacity is 360 passengers, based on a one-minute ride time and 30 seconds for loading/unloading. Finished with a witch figure on top, the ride also features a themed cottage backdrop.

The new attraction cannot be missed at Taunus Wunderland as it sits immediately to the left of the main entrance at this park in picturesque hilltop surroundings close to the thermal spa town of Schlangenbad near Wiesbaden. 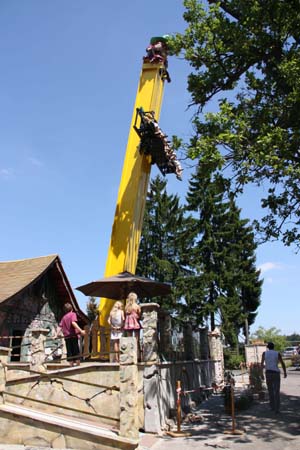