Everything about KMG’S new ride concept is compact – the name, the set-up and the price.

Passengers on XLR8 (Accelerate) will experience high speed coupled with fast acceleration and deceleration, with speeds of up to 70km/h controllable by the ride operator. The attraction’s eight two-seater suspended cars flip from side to side during the ride, as the arms turn around the centre. The entire ride can come to a stop in just half a circuit.

Constructed on one semi-trailer, the travelling ride will feature a self-supporting folding platform and require an assembly time of just one-and-a-half hours. Designed for economically-challenged times, the attraction boasts a low purchase price, although a number of add-ons are available as extras.

XLR8 was officially unveiled to KMG customers at Euro Attractions Show in Rome at the beginning of October. Following enquiries from Scandinavia, the UK and the Netherlands, the first ride will be delivered in late August/early September 2011. 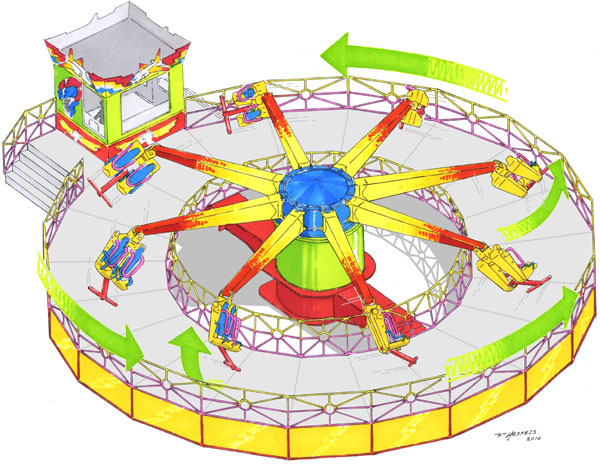