Set to debut this coming April, Mission Space is the latest concept from Dutch ride builder KMG. And what a beast it is.

The attraction (pictured above during construction) will stand 80-metres tall and offer riders an exhilarating experience as they fly high over other rides below. After boarding the ride’s two 10-seat gondolas at ground level, passengers will be lifted to dizzying heights as each arm flaps up and down like a bird while the central column turns. The ride will occupy a 25 x 21 metre footprint, but its “wingspan” will extend to around 80 metres when in full flight. KMG has designed a new style of seat (as pictured below) complete with waist-level restraints for use on this and other rides including the Afterburner. Jules Verne-style theming will enhance Mission Space’s optical appeal and soften its otherwise somewhat industrial appearance.

As with all KMG attractions, maximum portability combined with clever construction techniques are the order of the day. The ride will travel on four trailers, one of for the telescopically-erected central column, two acting as legs/supports and one for the platforms. Despite the machine’s height, no crane will be required for assembly.

The ride will debut at Rotterdam Easter Fair under the ownership of Tony Kroon, whose family have travelled many of KMG’s prototype attractions. As well as presenting the ride in Holland, Kroon will also apply for concessions at selected German fairs. A park version of the ride is available for “under €2 million,” with the option of added capacity if foundations are added. 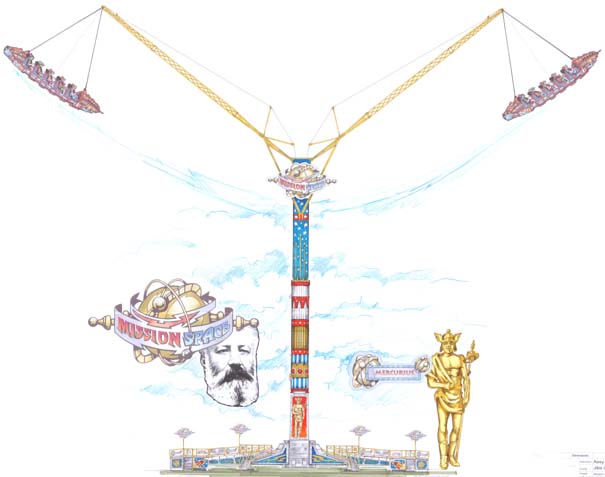 As well prepared to launch the mighty Mission Space this coming spring 2011 (see above), the Dutch ride manufacturer KMG also has a full order book for a number of its tried and tested attractions.

In November the company delivered its latest Speed propeller ride to the British showman Edward Danter. Further versions are on order for customers in France and New Zealand. KMG has now sold 28 units of the ride worldwidr. Its most popular attraction to date, however, is the Freak Out, a slimline and highly portable version of the Afterburner suspended Frisbee style attraction, the firm’s previous best seller. The next one is going to US carnival operator Fantasy Amusement. A park model Afterburner is bound for Morey’s Piers in New Jersey.

KMG has also secured an order for its fourth XXL – the big brother of the Afterburner/Freak Out. The ride is bound for German showman and Munich resident Sebastian Küchenmeister, who is expected to apply for a position at the city’s Oktoberfest. No customers have yet signed up for XLR8, KMG’s cheap and cheerful new fairground ride, but there is interest from the US and UK. According to company salesman Peter Theunisz, “the best thing is to build one first and then sell it. Showman are emotional buyers.” 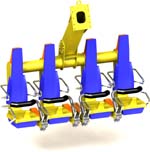