Is it a bird? Is it a plane? Actually it’s the latest big thrill ride from Dutch manufacturer KMG and it debuted recently Fair in Rotterdam.

Available for both parks and travelling showmen, this monster construction provides passengers with a unique sensation as they soar over the park or carnival below. In full flight the ride stands around 80-metres tall with a 76-metre “wingspan” – creating a beacon for any venue.

As well as the natural swing created as the tower rotates, the arms also flap up and down like a bird, rising and falling by 10-metres during the ride. A new lapbar system – also in use on the “IT” (Fireball) at Morey’s Piers in New Jersey – gives riders more comfort and freedom of movement, and ultimately a more breathtaking experience.

“Mission Space is like a hit song,” believes KMG sales manager Peter Theunisz. “It only lasts about three minutes but it makes a lifetime’s impression!”

As can be seen in our pictures here, the new attraction looks a picture after dark thanks to the latest lighting technology, featuring over 21,000 LEDs, controlled by DMX technology. Artwork is provided by long-time KMG collaborator BB Dekorateurs, while an integrated sound system comes courtesy of Hofman. 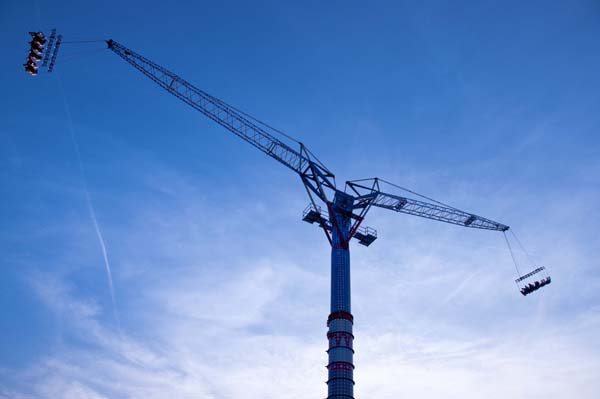 Featuring two 10-seater gondolas, Mission Space provides an hourly capacity of around 500, although larger capacities could be provided in static installations if foundations are provided. The total construction weighs 156 tonnes and occupies a 31 x 25-metre footprint including two loading/unloading platforms.

As with all KMG products, construction time on Mission Space is kept to a minimum and despite the ride’s massive size no crane is needed. The attraction travels on four semi-trailers, one each for the tower, arms, platforms and gondolas/control booth. Hydraulic assembly is controlled wirelessly via a portable LCD touchscreen and Siemens Simantec software. Set-up takes around eight hours using six men.

Taking around two years develop, engineer and construct, Mission Space is the world’s largest travelling amusement ride, and the man with the task of moving it is Dutch showman Tonny Kroon. As well as appearing at major events in the Netherlands, including this summer’s big Tilburg fair, he will also make occasional trips into Germany. 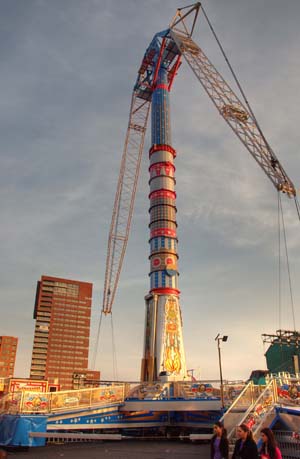