KidZania was born in 1999 as La Ciudad de los Niños (City of Children), a role-playing entertainment centre in Mexico City’s Sante Fe Shopping Mall. A second outlet followed seven years later in Mexican city of Monterrey, and now the concept has been franchised to a further six cities around the world, with many more on the horizon.

How was the Kidzania concept born?

Xavier López Ancona (XLA) – Well first of all it’s important to say we did not invent role-playing! Role-playing is something children do everyday at home, everywhere around the world; they see what their parents do and imitate it. We took children’s favourite game and made it an attraction. Before there were some similar ideas with role-playing inside children’s museums, but I think this is the first time anyone has put it altogether under one roof and done a whole city with all the buildings, all the different professions and its own economy.

How do you market the concept in new countries?

XLA – We do very little advertising at the beginning, but we do a lot of PR. Targeting kids is very simple because one kid goes and tells his whole school, “I went to this cool, exciting place” and word of mouth spreads very fast. We also have a TV studio, a newspaper office and a radio station as attractions in most of our venues, in partnership with local media, so by working with these partners that helps us promote KidZania a little bit.

Cammie Dunaway (CD) – I’ve been fascinated looking at YouTube videos and Tweets from parents that have been to a KidZania in Dubai or Tokyo and just want to spread the word to their friends. KidZania is very much a media company as well as an entertainment company and our partners certainly help promote the brand and create awareness.

How do you create an engaging ‘edutainment’ experience?

CD – If you can make experiences fun you can really use that to teach and to reinforce positive aims. That has been shown with something like the Wii Fit games console, where all of sudden Nintendo got a lot of people exercising because it was fun to workout on the Wii. Kids today spend a lot of time alone on computers and watching TV, so face to face interaction is very important for parents. KidZania is all about empowering kids by teaching them in fun ways all about teamwork and making choices. Bringing education and entertainment together is a very powerful combination and KidZania is doing is better than anyone else.

Why are shopping malls the perfect fit for your attractions?

XLA – We like being in shopping malls for many reasons. First, the investment is lower than if you go out and buy a piece of land, put up a shell, parking; all these facilities. Shopping centres have very good infrastructure, access and transportation, so we tap into that. We also get an immediate address. Rather than saying you are at 556 International Drive or whatever, you are inside this shopping centre which most people know and which enjoys good visibility. Also I think most malls need entertainment, so I think there is a lot of scope for us and the shopping centre to work together. 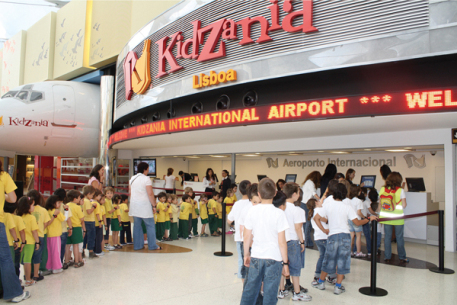 What is the typical KidZania attendance?

XLA – Anywhere from about 500,000 to one million a year. In Mexico City, we get about 70% of visitors from the city and 30% outside. Those 30% only come once a year but the locals come on average three times a year, which for our type of entertainment is very high.

XLA – As I said before, role-playing is universal, but of course we customise it for each location. Every place we go we choose local partners who know the market, that is very important. In each attraction there is a mix of 50 to 60 different establishments and professions for the kids, and we change the mix to reflect the local culture. In Indonesia we have a noodle factory, in Mexico we do a lot of activities with Mexican food, in Japan there’s a lot of education establishments.

CD – One of the benefits of having a global presence is that good ideas can come from anywhere. As Xavier highlighted, education is very important in Japan and they came up with this idea where if kids go to university they might be able to earn higher dollars (‘kidZos’) for the work they do. That’s a brilliant idea that has been rolled out to some of the other KidZanias around the world.

How will you adapt the KidZania concept to the US?

CD – I think the opportunity to bring this to the US is incredibly exciting. There really is nothing like this in the States and every person that I have spoken to, whether it’s a parent or a marketer, believes the time is right. We really need to empower and equip our kids and KidZania teaches them so many good skills. For us there are some markets that really make sense, as many as 16. We are looking at starting in somewhere like New York, Los Angeles or Chicago. We also think it is going to very attractive for our sponsor partners. As someone who has worked in kids marketing for many years at Nintendo I know there are not that many opportunities to create authentic experiences where kids can touch, taste and feel the brand.

Have you encountered much resistance from parents who object to brands marketing at children?

XLA – We have been in eight cities and never had a bad reaction. I think really it depends how you do it, and we have very strict rules on how our partners can get involved. Kids know their brands because when they walk down the street it doesn’t say “gas station” or “bank” it says Exxon or Bank of America. Having local brands make our attractions more representative of real life. Of course we shy away from alcohol or cigarette brands, even coffee. We prefer activities involving health and nutrition, all these things to get kids ready for real life.

How do you develop individual activities and attractions for each KidZania?

XLA – Once we have decided on the activity we team up with the largest university in Latin America, and we work lot of education professional to make sure the content is well developed. Because one third of our business comes from schools, we work for up to a year-and-a-half before we open to adapt the educational content to the needs of that facility.We then take the concept to our architects and then we do all theming and take it all the way through to the operational stage. Most of this is done in-house.

Would you ever consider adding rides?

XLA – No, I think our entertainment is different, we are interactive, we are participative, and we want children to be in the driving seat. Not having rides also make it much easier to change our content.

CD – Whether the kids are putting out a fire or trying to investigate who the criminal is as part of their police investigation, they are definitely getting thrills, just not with rides.

How can children continue the experience at home?

CD – One of the things we are going to be doing soon is creating an online experience, which will be very much based on role-play and the idea of kids being able to try out different professions. This should give kids who maybe can’t get to a KidZania a chance to get involved. We also think that having our own currency, kidZos, is very powerful and something that can work online as well offline.

What’s the next step for KidZania?

XLA – We are building the next generation of KidZanias in Mexico City, which will open later this year. Instead of a child walking in and asking for a job, it’s going to be outdoors and they can go by car, we will have oversized electric go-karts they can drive. We will also be addressing topics like inner city driving, accident prevention, health, sports, nutrition and awareness of people with different abilities. We want kids to see the effort that is put into building a city and to take care of it, because it’s theirs. This concept will work well in Mexico and, because it’s outdoors, maybe we will look do it in places like LA or Orlando where there is also good weather.

KidZania is place where children – or “kidizens” – drive the buses, work in the bank, write the local newspaper and live out their dreams as they take on adult roles in a world created just for them. Up to 60 different establishments and professions are featured in each KidZania location.

The city also features its economy, with “KidZos” used to pay for goods and services, as well as real world brands thanks to the commercial partnerships that form a key part of the KidZania business model.

Existing KidZania attractions can be found in the following cities, usually in shopping malls:

Additional expansion is planned into Turkey, Egypt, Saudi Arabia, Kuwait and the US, with several other countries under consideration.

In particular, North America is identified as a major growth area and here, as in Mexico, all outlets will be company-owned rather than franchised operations. In addition to Cammie Dunaway’s role as US president and chief global marketing officer, three news appointments have been made in recent weeks at KidZania’s Silicon Valley office in California. Jason Hovey will act as general manager for interactive, Tom Delaney is general manager for merchandising, while J Andreas Hjelming serves as chief technology officer.

KidZania is not the world’s only role-playing attraction. Founded by another Mexican operator (Grupo CIE), Wannado City opened at Sawgrass Mills in Fort Lauderdale, Florida, in 2004. Like Kidzania, it was located in a shopping mall and engaged children in role-playing activities across a range of professions and experiences realised in co-operation commercial partners. Instead of ‘kidZos’ children used a currency called ‘Wongas’ to set up bank accounts. Citing financial difficulties, the attraction closed earlier this year, paving the way for KidZania’s planned push into the USA.

Over in China, Ideal Kingdom at Dinoland in Dalian offers children role-playing fun in themed sets including a farm, police station, theatre and more. “I wanna be a kid again!” is the cry from thousands of adults as they take their kids to this special three-day event to mark International Children’s Day each June.