The German park Tripsdrill has announced that its new Gerstlauer launch coaster will be called Karacho and open in June.

Launching from inside a tunnel, the LSM-powered ride will go from 0 to 100km/h in 1.6 seconds and feature 700-metres of track including a 30m-tall ‘top hat’ section and four inversions plus a second tunnel. Using four 8-seater cars with lap bars, it will deliver hourly capacity for up to 960 riders. In keeping with the park’s family-friendly credentials, the height limit will be just 1.25m.

Benjamin Fischer, son of owner Helmut Fischer, spent four years researching the ride and sampling other launch coasters in the USA, United Arab Emirates, Europe and Japan before committing to Gerstlauer. Previous park collaborator Emmanuel Mongon of Imaginvest (Paris) has been invited to work on themes for Karacho, which will be Tripsdrill’s fourth coaster.

Over €7 million has been committed to new attractions in 2013 – Tripsdrill’s largest ever investment. As well as the new coaster, a 1,000 sq m play area and a children’s tower ride are also planned. Located in Cleebronn near Stuttgart, the park features charming theming portraying an idealised picture of the local area. The season kicks off on March 23.

Pictured below: The Fisher family with a model of the planned coaster. 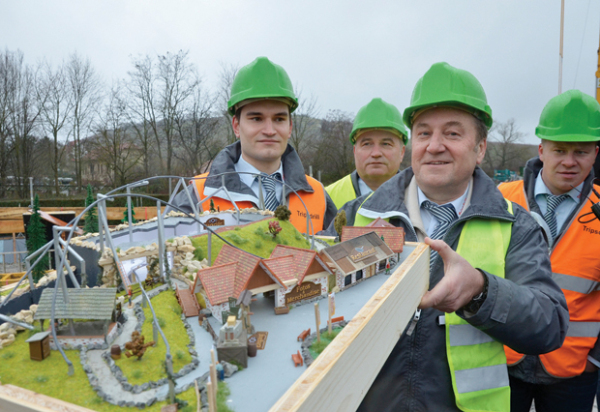