As Alton Towers celebrates its 30th anniversary as an amusement park, Park World talks to the “ideas man” behind many of its most famous attractions.

Now one of the UK’s leading destination resorts, Alton Towers is home to a world-class selection of rides and attractions including Nemesis, Air and Oblivion. The ride that kick-started it all, however, was a Vekoma Corkscrew installed in 1980, which transformed the fortunes of the 500-acre (2 sq km) stately home and gardens in Staffordshire. This year a new attraction, TH13TEEN by Intamin, replaced the Corkscrew, opening after an intense promotional campaign and speculation from fans. John Wardley, consultant to Merlin Entertainments, is in conversation with Owen Ralph.

How did you first become involved with Alton Towers?

I was involved with the purchase of the park by Tussauds back in 1990. We had made a very successful development at Chessington Zoo, turning it into Chessington World of Adventures. Pearson, who owned Madame Tussauds, wanted to be the brand leader, but we had tremendous trouble with planning permission; wherever there was nice landscape we could never get planning consent. So Ray Barrett, Tussauds’ executive director, said we were going to have to acquire an existing operation, and we acquired Alton Towers from John Broome.

What were some of the first steps you made when Tussauds took over the park?

I came up with a masterplan that made it look as though we had done a mega hit on the park, but without involving a huge amount of capital. The rapids ride was sadly underexposed; it was hidden away behind a fence. My philosophy is that you should allow people to enjoy the ride even if they have not got the guts or the will to ride it. I came up with the principle to turn the rapids inside out, allow people into the centre of the ride, we created a themed area around the rapids and added a Mack runaway train. Next came the dark ride, the Haunted House [now Duel], and then the Thunder Looper [by Schwarzkopf]. The Thunder Looper was only on temporary planning consent and that was due to expire so we needed to replace it with something roughly in the same area. That’s where Nemesis came along [the UK’s first B&M coaster].

Nemesis provided another major turning point for the park, would you agree?

Oh definitely. The one person that can be credited with the success of that ride other than myself is Nick Varney, who was marketing director of Alton Towers at the time. The two of us worked together and created the Nemesis concept and now Nick Varney is chief executive of the world’s second biggest attractions operator. Back then though that ride was the biggest thing in the amusement industry in the UK, and were both heavily involved with it.

Was it a difficult decision to remove the Corkscrew?

When the Corkscrew was first put in by John Broome, it was seen as the ultimate terror machine, a real challenge to ride. It no longer was that. Research indicated that although there was a lot of nostalgic value to the old Corkscrew, it was not up there with the top rides any longer. It was still in excellent condition, but it was time for the ride to go into retirement. I can tell you, however, that Alton Towers do respect its iconic value and have erected a monument to the ride at the park’s entrance.

Where did the concept for TH13TEEN come from?

Planners had indicated they would prefer us to use the old Corkscrew site for the new coaster, but that they might also be open to us going into the woodland around the Corkscrew. That implied some sort of theme involving the woodland as there was absolutely no question of us felling any trees and we had to take the ride through the woods. The theme is quite dark, but basically it’s that the woodland has taken over the Towers. It’s a back story; a story that you don’t actually need to understand. If you try to do be too clever, invariably your guests do not take it on board and you fail dismally. There was great fun and games on the internet though with people reading far more into the story than we ever meant!

TH13TEEN is the “world’s first freefall drop coaster.” Please explain what lies behind the bragging rights 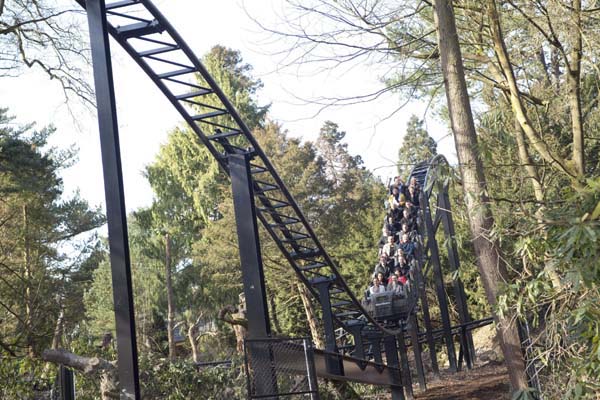 During the drop sequence you enter the upper level of a crypt, the door closes behind you to give you a light seal, there is a false drop, then there is the main drop as the track falls and various special effects take place before you are blasted off backwards. The false drop is only a few centimetres, but it makes everyone scream and think that’s it, then the real drop occurs, which is quite significant, about 5 metres. We researched what sort of drop we would need, and we didn’t need a massive drop to achieve the right effect. You achieve weightlessness after a freefall of just a few metres, therefore it doesn’t mater whether it’s 5 metres, 10 metres or 20 metres, in the dark the effect is more or less the same.

How accommodating was Intamin in designing the freefall element?

They were very up for it, and in effect already had most of the technology. They had taken the panoramic tower at Heide Park and turned it into a freefall using magnetic brakes, so it was just a case of designing some very beefy hydraulics for the coaster and away we went.

You managed to keep details of the ride secret right up to the last minute. How important was this?

It wasn’t just marketing hype, although that did have a lot to do with it. With nearly all coasters what you see is what you get, there is very little held back from the rider before they have actually ridden it, so we wanted to use the woodland to hide a little of what was to come. We were very keen not to spoil the surprise of the freefall. It’s rather like revealing the outcome of a whodunit before an audience has even watched the play. On Opening day, I think it was true to say that 99.9% of people who went on the ride got a complete shock when that drop occurred, and that made the ride unique. Since then word of mouth has got out, but that has just aroused even more curiosity.

How important is it co create a unique identity for each ride?

Terribly important. One of the criteria that Merlin applies to any project when it comes to capital investment is that there needs to be a fundamental, compelling proposition to that attraction, which has to be more than just the mechanics of the ride.

Is this approach one of the reasons why Europe has avoided joining the Rollercoaster Arms Race?

There are a number of reasons why we’ve we avoided the Rollercoaster Arms Race and I’m ashamed to say one of those reasons is that we can’t get planning consent for many rides. That forces us to be much more creative than the Americans, who can basically throw anything up in the air with very little difficultly. So really the planners, God bless ‘em, are part and parcel of our success!

What projects do have lined up for the future?

I’m doing some Halloween stuff at the moment for Alton Towers, and I will be involved with the next few years of development for Merlin. There are big rides planned for Alton, we’ve got more for Thorpe Park, more for Heide Park; there are long terms plans and major capital investments for all the parks. I don’t do much outside the amusement industry any more; I’m almost retired and tend to choose what I want to do.

Timelapse video footage of the Corkscrew’s removal can be viewed here.

Below: The Corkscrew monument at the gates to Alton Towers 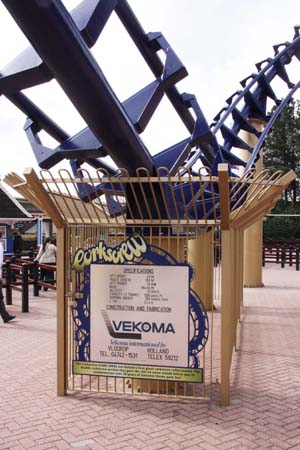