John Holer, founder and owner of Marineland of Canada, passed away peacefully at home on June 23, 2018 in his 83rd year. Marie, his wife of 46 years, survives him. He was the father of Peter and the late Johnny. and grandfather of Lailah and Lidiah. He is also survived by his brother of Bronko (Fini) of Slovenia and Marica (Vinko) of Germany, and many nieces and nephews. 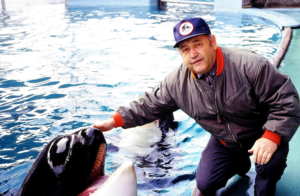 In the early 1950’s Mr. Holer emigrated from his native Slovenia to seek a future in Niagara Falls, Canada. As a lifelong self-reliant entrepreneur, he pursued his vision with determination and passion to create a theme park where all Canadians could discover their own passion for Canada’s fascinating marine animals.

Starting in 1961 with a two-acre site, two sea lions and a bear, he grew Marineland into one of the largest and respected aquarium and theme park’s in the world. Marineland now covers one thousand acres and, among other attractions, houses the finest collection of Beluga Whales in the largest pools in the world.

Mr. Holer was always dedicated to the best interests and health of all his animals. He believed in supporting each animal from birth through old age remaining committed to keeping animals in good health and nursing them through any bad health. He was a committed and active member of the Niagara Region, living next to the Park throughout his life in Canada.

Through Marineland, Mr. Holer attracted millions of visitors to the Niagara Region and re-invested year after year to grow the Park. Even in declining health, he focused on his work, developing a new Avian Safari which would become Canada’s largest outdoor aviary. Exchanging ideas and his vision with, among others, Walt Disney and August Busch, he was considered one of the original and great founders of North America’s Aquarium and theme park community.