The trade show Amusement Expo Europe, which took place in Genoa, Italy, from October 28 to 30, attracted over 3,000 visitors from more than 35 countries according to organiser Fiera di Genova.

Though less than half the number attracted to the rival Euro Attractions Show a month earlier in Amsterdam, the figure was nevertheless within the organiser’s expectations.

“We achieved the results we expected on the eve of the show,” declared Fiera di Genova managing director Roberto Urbani. “The new pavilion B was particularly appreciated as the ideal venue to host specific types of product, representing the excellence of ‘Made in Italy’ production.”

The show was supported by trade associations including the pan-European ESU and AiCE, ANCASVI, ANESV and Unionparchi (Italy) and DSB (Germany). Featured among the exhibitors were leading Italian companies such as Bertazzon, Fabbri, IE Park, Lamborghini, Moser’s Rides, Sartori and Zamperla.

An initiative by the Italian Institute for Foreign Trade, Ministry for Economic Development and Liguria Regional Council brought buyers from Egypt, India, Turkey, Greece, Spain, Central/South America and the Middle East together with exhibitors in a series of one-to-one meetings.

“I would like to warmly thank the organisers who, in spite of the difficult economic scenario, have believed in this event and ensured adequate exhibition areas and visibility,” declared ANCASVI president Andrea Munari of IE Park. “ICE made great efforts to involve a highly qualified group of international buyers that were taken care of and hosted in an excellent manner.”

Meetings and workshops involving various showmen’s associations and other industry bodies were held during the show. Members of ANCASVI and ANESV, for example, debated strategies for recovery in the current economic climate.

Also held during the week was the sixth Golden Pony award ceremony courtesy of publisher Facto Edizioni. For the first time, manufacturers and suppliers were recognised for their excellence alongside parks and fairground operators. Winners in this new category included Alterface, Dotto Trains, Gerstlauer, KMG, Mack Rides, Moser’s Rides and Zamperla.

In 2010, Amusement Expo Europe will take place at Messe Stuttgart in Germany, dates to be confirmed. 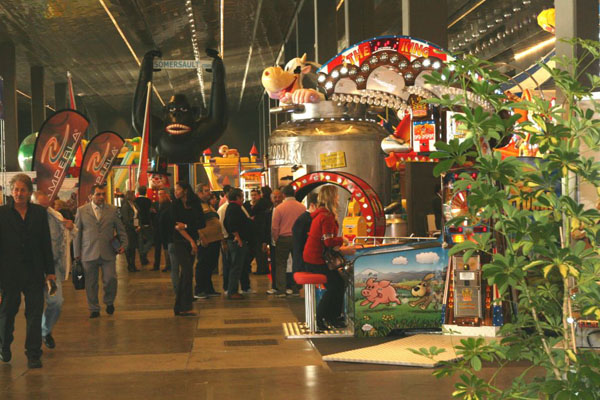